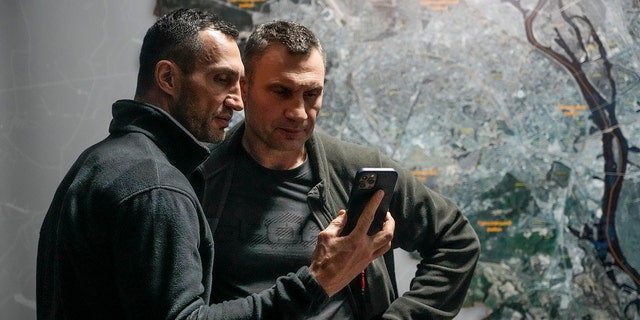 Tyson Fury expanded on his support for the Ukrainian boxers who have joined the fight against Russian forces that have invaded their homeland.

Boxing legends Vitali and Wladimir Klitschko, Vasyl Lomachenko and possible future opponent Oleksandr Usyk are among the Ukrainian boxers who joined the military to fight Russia.

“Two laws, love your woman and fight for your country. So they should be fighting for their country. Why not? If the war comes to the United States or United Kingdom, then I’ll be joining. Don’t worry about that. We all will! Why ain’t we gonna defend our own land? C’mon, behave yourself,” Fury said in an interview with TMZ Sports on Wednesday.”

Fury said the prospect of having money doesn’t have anything to do with it because there may not be a home to go back to.

“What’s money got to do with it? You got no homeland to go back to, all the money in the world’s no good to you. You can’t spend it.”

When asked whether he had any words for any of the Ukrainian boxers, Fury replied: “Keep fighting boys, never surrender.”

UKRAINE’S BOXERS IN THE FIGHT OF THEIR LIVES

Fury said Tuesday ahead of his next bout against Dillian Whyte he would do the same for his home country.

“Well, it’s what they should be doing,” Fury told talkSPORT of the Ukrainian boxing stars. “When it comes to war on UK soil, I’ll be first up.

“I’ll be first up, I’ll be the easiest target to hit at 6-foot-9 inches, I’ll be dead first. Frank [Warren] will be shading from the bullets behind me, and I’ll just catch them all like a nutcase.”

Fury is the WBC and The Ring magazine heavyweight champion and has been since he beat Deontay Wilder in 2020.

The “Gypsy King” told reporters at his pre-fight press conference the Whyte fight would be the last of his career.

“This is the final fight of my career, I’m retiring after this. … $150 million in the bank, good-looking, healthy, young, I’m going to buy a massive yacht abroad,” Fury said. “Got loads of cars and properties all over the world. Just going to sit back with a hot blonde and piña colada … I’m retiring, I’m out, this is my final fight, the final countdown, I’m done.”

Fury and Whyte are set for April 23.