Ukraine urges world to ‘step up,’ impose no-fly zone, while US lawmakers warn this would mean ‘World War III’ 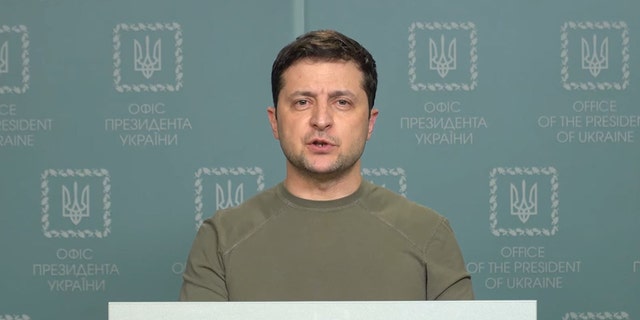 As the war between Russia and Ukraine rages on, Ukraine is urging the international community to impose a no-fly zone over their country, but the Biden administration and lawmakers from both parties are firmly against such a move.

In a video posted to Twitter Sunday morning, Ukrainian President Volodymyr Zelenskyy delivered a message bearing subtitles in English that said, “We repeat everyday: ‘Close the sky over Ukraine!'”

US, POLAND IN TALKS TO HELP UKRAINE ACQUIRE WARPLANES

Ukrainian Ambassador to the U.S. Oksana Markarova espoused the same message on “Fox News Sunday,” in response to the Biden administration stating that it would not be imposing a no-fly zone. Markarova offered a reminder that Russia attacked Ukraine unprovoked, and that if this could happen to Ukraine, it could happen to others.

Ukrainian President Volodymyr Zelenskyy
(Office of the President of Ukraine)

“So if this situation, you know, happened to Ukraine, who is safe? What democracy can feel safe right now?” Markarova wondered. “So, I think, you know, the events of the past 11 days clearly shows that we have to act together and that Russia can attack anyone being totally unprovoked like they did with Ukraine. So it’s time for all of us to step up.”

Sen. Marco Rubio, R-Fla., explained why a no-fly zone is more complicated and dangerous than people may realize.

“It’s not just some rule you pass that everybody has to oblige by. It’s the willingness to shoot down the aircraft of the Russian Federation, which is basically the beginning of World War III,” Rubio told ABC’s “This Week.”

On “Fox News Sunday,” Rubio’s Democratic and Republican colleagues agreed, pointing out why a no-fly zone would not be in the best interest of the U.S., even if it is understandable for Ukraine to want one.

“I think we need to be clear that we are not going to go to war with Russia, that would be the beginning of WWIII, and it would drag all of Europe into a much broader war,” Sen. Chris Murphy, D-Conn., said.

“If I were President Zelenskyy, I would be asking for a no-fly zone. The problem is, there is no such thing as a no-fly zone over Ukraine,” Murphy said. “If the United States put planes in the air, we would immediately be shooting at Russian planes. They would be shooting at us. We would be at war.”

Sen. Joni Ernst, R-Iowa, also recognized that Zelenskyy was doing the right thing for his country to ask for a no-fly zone, but making clear that “we do not want to engage directly with Russians.”

“But what we can do,” Ernst said, “is provide all the defensive mechanisms for President Zelenskyy and his armed services to provide their own protected airspace.”

Ernst said this begins “with providing air platforms to President Zelenskyy, making sure that those pilots are able to protect their own airspace.”