Ukraine wants potential ceasefire to allow for evacuation of international students, including from China 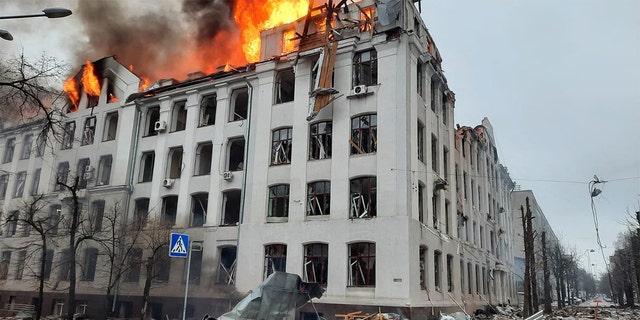 The Ukraine Ministry of Foreign Affairs is calling on Russia to stop killing individuals in Kharkiv and Sumy to allow for evacuations to take place, saying that students are currently “hostages” of the Russian government.

International students from countries such as India, Pakistan, and China are currently unable to leave the cities because of “indiscriminate shelling and barbaric missile strikes by the Russian Armed Forces on residential areas and civilian infrastructure,” according to the Facebook post made on Wednesday.

The government agency said it would assist international students in relocating the students to safer areas if a ceasefire is arranged, but said that current evacuations are extremely difficult.

A view shows the area near National University after shelling in Kharkiv, Ukraine, in this handout picture released March 2, 2022.
(Press service of the Ukrainian State Emergency Service/Handout )

“Attempting to arrange evacuations through cities that are being subjected to Russian bombing and missile strikes is extremely dangerous,” the post states.

The Ukraine Ministry of Foreign Affairs is also calling on the governments of India, Pakistan, and China to demand that Russia allows evacuations to take place.

UKRAINE HAS ADVANTAGES IF IT GETS PULLED INTO URBAN WARFARE FIGHT IN KYIV, EXPERT SAYS

Firefighters work to contain a fire in the complex of buildings housing the Kharkiv regional SBU security service and the regional police, allegedly hit during recent shelling by Russia, in Kharkiv on March 2, 2022.
(Sergey Bobok/AFP via Getty Images)

Russian forces have intensified in the city of Kharkiv, with strikes on civilian infrastructure continuing as Ukraine enters its seventh day of the Russian invasion.

At least six people were killed when Kharkiv’s Freedom Square was hit with what is believed to be a missile.

Russian President Vladimir Putin approved a “special military operation” in Ukraine on Feb. 24, saying “our confrontation with these [Ukrainian] forces is inevitable.”

Ukrainian Minister of Foreign Affairs later said that Putin had launched a “full-scale invasion” of Ukraine.