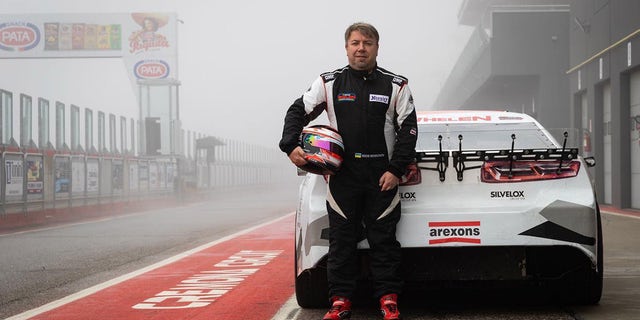 Like many racing drivers on the short tracks of America, Igor Romanov dreamed of becoming a NASCAR driver one day.

He achieved it, just a little differently than the rest.

Romanov lives in Ukraine and has competed during the past two seasons of the NASCAR Whelen Euro Series, which is sanctioned by NASCAR and features American-style stock cars racing on road courses across the continent. The 45-year-old is also a TV commentator for the NASCAR Cup Series races in his country.

“I’m working really hard to promote my favorite sport here in Ukraine, and I’m proud that we have a lot of new fans here,” Romanov told Fox News Autos.

Igor Romanov is a commentator for the NASCAR Cup Series broadcasts in Ukraine.
(Igor Romanov)

This year’s broadcast schedule was cut short after the Clash at the L.A. Coliseum and the Daytona 500 due to Russia’s invasion, which also led Romanov to relocate with his wife and son from Kyiv to his hometown of Rvine, about 200 miles west of the capital.

“The situation at some places near Kyiv is really bad. People are sitting underground without food, water and electricity.”

Ukraine’s only racing track, the Autodrome Chaika near Kyiv, was also destroyed during an attack on the village it is located in.

UKRAINIAN RACING DRIVER FIGHTING FOR HIS FAMILY: “THERE ARE NO WEAPONS TO DEFEND”

Members of the American NASCAR community have been stepping up to help the people of Ukraine. Team owner Richard Childress has pledged to send one million rounds of ammunition to the armed forces, Hendrick Motorsports is donating $302,000 to the Samaritan’s Purse charity’s relief efforts, and drivers are adding messages of support to their cars.

“I’m really grateful to the legendary Richard Childress for his help. Also for Hendrick Motorsports, for Ryan Blaney displaying the Ukrainian flag on his bumper, and for Stefan Parsons and the BJ McLeod Motorsports team for the Ukraine Strong livery,” Romanov said.

“All these things are extremely important for all of us.”

While Romanov’s family and friends are safely away from the fighting now, they are aware that it could come to them at any moment and are preparing for the worst.

“The people in Rivne are ready to fight with the aggressor. It’s a period of a national unity. The same situation is also in other regions,” he said.

Romanov knows it will be a long time before things return to normal, but remains upbeat and optimistic about the future.

“Hopefully one day I’ll visit the USA to see one of the NASCAR Cup Series races directly at one of the tracks. It would be nice, but first we need peace in Ukraine!!”