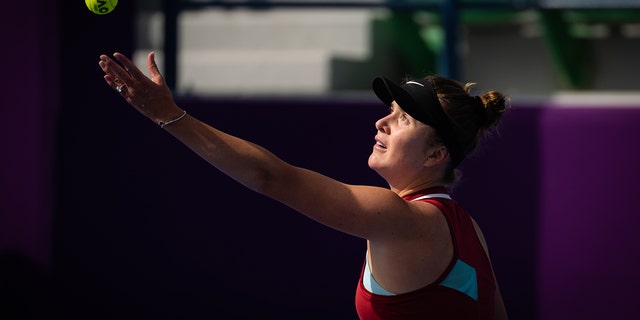 Svitolina was set to take on Russian Anastasia Potapova at the Monterrey Open on Tuesday but vowed she wouldn’t take the court unless the sport’s governing bodies took action against Russia over its invasion of her home country.

Elina Svitolina of Ukraine in action against Tereza Martincova of the Czech Republic during her first round match at the Qatar TotalEnergies Open at the Khalifa International Tennis &amp; Squash Complex on Feb. 21, 2022 in Doha, Qatar.
(Robert Prange/Getty Images)

“We Ukrainian players requested to ATP, WTA and ITF to follow the recommendations of the IOC to accept Russian or Belarusian nationals only as neutral athletes, without displaying any national symbols, colors, flags or anthems,” Svitolina said in a statement on Instagram.

“Accordingly, I want to announce that I will not play tomorrow in Monterrey, nor any other match against Russian or Belarussian tennis players until our organizations take this necessary decision.

“I do not blame any of the Russian athletes. They are not responsible for the invasion of our motherland.

“Moreover, I wish to pay tribute to all the players, especially Russians and Belarusians, who bravely stated their position against the war. Their support is essential.”

“Even when I was a kid, I dreamed of playing tennis without choosing a match, a country or a partner in the game…for me there is no opponent from any country, I am fighting for victory, my best game, my best result…Unfortunately, now we, professional athletes, are essentially becoming hostages to the current situation…I am against grief, tears and war,” she wrote on Instagram.

The International Olympic Committee (IOC) urged governing bodies for each sport to exclude Russian athletes and officials from international events, including the World Cup.

Svitolina is No. 15 in the world and finished in the semifinals in the 2019 Wimbledon and U.S. Open tournaments.