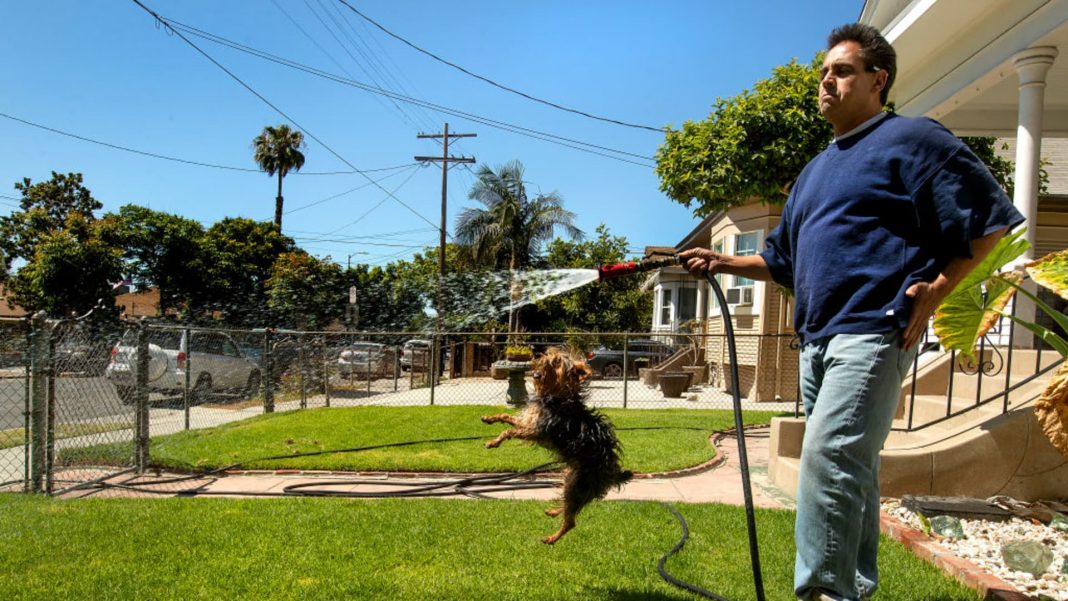 Paul Ramirez, 54, waters the front lawn at his home on St. Louis St. in Boyle Heights, as his dog Bandit, a 2 year old Yorkshire terrier, jumps for joy.

Unprecedented restrictions on outdoor water use go into effect on Wednesday for more than 6 million residents in Southern California as officials try to conserve water during a severe drought.

The conservation rules, among the strictest ever imposed in the state, were set by the Metropolitan Water District of Southern California, one of the largest water distributors in the country.

Households are now forbidden from watering their lawns more than once a week in many jurisdictions. The goal is to slash water use by 35% as the state enters its third straight year of drought.

The rules come after California water officials in March announced they were cutting State Water Project allocations from 15% to 5% of normal amid declining reservoir levels and reduced snowpack. California’s two largest reservoirs have already dropped to critically low levels, and the state this year experienced its driest January, February, and March on record.

“The amount of water we have available to us right now is not going to be enough to carry us through the entire year unless we do something different,” MWD General Manager Adel Hagekhalil said during the district’s announcement in April. “This is a wake-up call.”

The megadrought in the U.S. West has produced the driest two decades in the region in at least 1,200 years. Conditions are likely to continue through 2022 and could persist for years. Researchers publishing in the journal Nature Climate Change have estimated that 42% of the drought’s severity is attributable to human-caused climate change.

As the summer months approach, curbing outdoor water usage is the most effective way to conserve water. Landscape watering represents about half of all urban water use in California.

During the state’s drought from 2012 to 2016, former Gov. Jerry Brown ordered a mandatory 25% cutback in water use, during which many residents responded by switching to drought-tolerant landscaping.

Gov. Gavin Newsom has not imposed such mandatory restrictions, but requested last year that residents curb household water consumption by 15%. Officials have also urged people to use recycled water for outside projects, take shorter showers and only run the dishwasher and washing machine when full.

A nearly empty Lake Oroville is seen from above in Oroville, California on September 5, 2021.

But residents have failed to conserve water. In fact, the state’s average urban water use rose nearly 19% in March compared to the same month in 2020, according to data from the State Water Resources Control Board.

Officials have warned that if water use doesn’t decline enough or if drought conditions grow more severe, they could impose a full outdoor watering ban as soon as September.

Newsom, during a meeting last week with leaders from the state’s largest urban water suppliers, warned that the state could be forced to impose mandatory water cutbacks if conditions don’t improve.

“Californians made significant changes since the last drought but we have seen an uptick in water use, especially as we enter the summer months,” Newsom said in a statement. “We all have to be more thoughtful about how to make every drop count.”