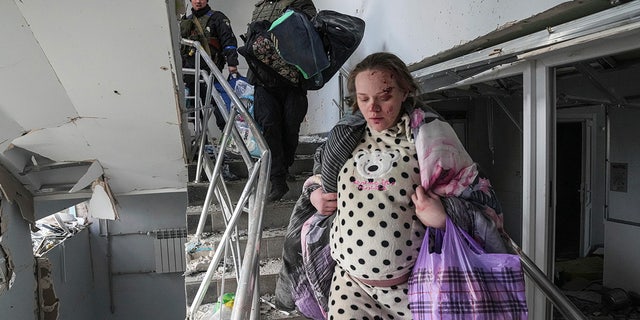 FIRST ON FOX: U.S. doctors are providing free telehealth services for Ukrainian soldiers, civilians, and refugees amid Russia’s invasion through an app connected to the Starlink internet that Tesla set up in the embattled eastern European country.

“Day after day in America, we witness atrocities in Ukraine on our screens. Aimee’s goal is to send back real help to directly and meaningfully make a difference in Ukraine,” Laura Purdy, MD, chief of medicine for Aimee Ukraine and a telehealth physician executive, army veteran, and entrepreneur, told Fox News Digital.

More than one million children have fled Ukraine to neighboring countries since the start of the Russian invasion last month, according to Catherine Russell, the executive director of the United Nations Children’s Fund (UNICEF). At least 37 children have been killed and 50 were injured since Russian President Vladimir Putin ordered the invasion on Feb. 24, Russell said. According to the UN, the lives of at least 549 civilians have been snuffed out during Russia’s invasion.

A shelling attack at a maternity hospital in Mariupol Wednesday left 17 injured and three dead, Ukrainian officials said. Russian officials claimed, without evidence, that the hospital was a Ukrainian militia base.

RUSSIAN TROOPS AIMING TO ‘MINE’ NUCLEAR PLANT TO ‘BLACKMAIL THE WHOLE OF EUROPE:’ ZAPORIZHZHIA EMPLOYEES

“American corporations are doing their part by cutting off resources to Russia; today, U.S. healthcare is stepping up to flex its muscle to deliver medical resources to the Ukrainian people,” Purdy added. “Aimee will connect American doctors to patients on the battlefield to save lives and get help where it’s needed most.”

She encouraged Americans to help the effort. “For every American screaming at their TV and crushed by their social feeds, supporting Aimee in Ukraine is an opportunity to do something to help,” she added. “This effort proves that free societies can do much more to help in combat and the families fleeing for safety.”

“America is a unique, indispensable, and infinitely capable nation,” Desjadon told Fox News Digital. “As Americans, we all feel a special kinship with free people and a need to help those fighting for their own freedom. We can’t just watch. We see ourselves in the Ukrainian people, we want to help, and across the board – we are. We’ve seen an almost unprecedented mobilization from private citizens and industry to a huge effect.”

“The biggest brands in energy, finance, and technology are already stepping up to render the ruble worthless, bring internet access to Ukraine, and bring Russian citizens to the streets,” he noted. “Now we’re mobilizing U.S. healthcare, a $3 trillion force for good with virtual capabilities, to bring U.S. doctors directly to Ukrainian phones and computers on the battlefield in their homes, shelters, and growing refugee camps.”

“At $3 trillion, U.S. healthcare is twice the size of Russia’s GDP. We can save lives faster than Russia can take them,” Desjadon said. He encouraged Americans to support Aimee “with donations, and capabilities like clinician time, additional technology resources, and even medicines.”

Chuck Lessin, founder of three Virginia charities and the descendant of Ukrainian immigrants, told Fox News Digital that he is organizing a coalition to support Aimee Ukraine.

“Three of my four grandparents emigrated to the US from Ukraine in the early 1900s,” he said. “As fate would have it my daughter married a man from Ukraine last year. His name is Oleksii Nikitenko and his parents and many others in his family are still there. We are panicked over their well-being.”

“As the founder of three charities in Richmond, I began looking for ways to help,” Lessin added. “When I learned of the awe-inspiring good that Aimee is doing in Ukraine, I knew this was the right cause.”

Lessin, the founder of Cheers, Jerusalem Connection, and Camp Binyan Torah, said he is using his network to fundraise for the telehealth effort.

“I’m working now to pull together Virginia charities to form a coalition to aid in this effort,” he said. “This coalition will direct all donations in their entirety to this effort. While the coalition is being formed, I am directing all of the donations made through my Jerusalem Connection website that indicate ‘Ukraine’ to go 100% to this effort.”