UVA Students Demand Transparency After Noose Is Found on Campus 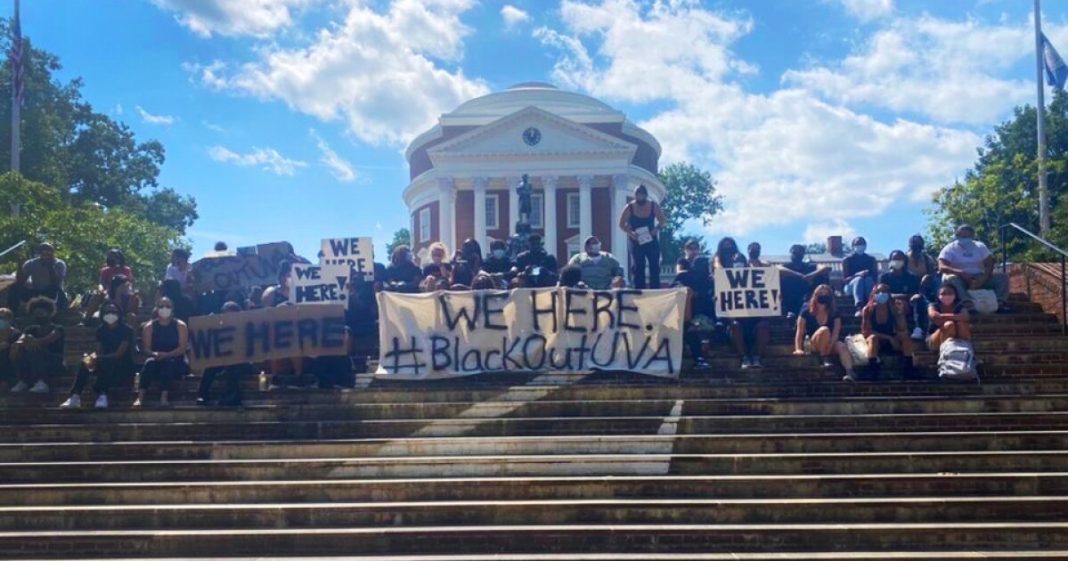 
It was 7:02 a.m. on September 8 when Terrell Pittman, a second-year student at the University of Virginia, received an email with the subject line “Community Alert — Hate Crime.” But even before he checked his inbox that morning, Pittman’s phone was blowing up with messages from classmates: A noose hung around the neck of the university’s famous statue of Homer.

The university, in some students’ view, did not act with the urgency the incident warranted, and has not been forthcoming with details about the case. So Pittman, who leads the Black Student Alliance’s political-action committee, and other Black students took to the Lawn — a focal point of the campus — in protest.

Wednesday marked the third day of demonstrations about the incident on the campus — one that has strong memories of the 2017 Unite the Right rally, when white supremacists descended on Charlottesville, carried torches across the UVA campus, and clashed with the police. One white supremacist rammed a car into a crowd of counterprotesters, killing one and injuring dozens of others.

For Black students, the appearance of the noose this month represents the history of lynchings that killed thousands of Black people in the United States.

For Pittman it evoked memories of a more recent incident. On August 19 the building that houses the Office of African American Affairs was vandalized. In a statement, university officials said the vandalism had not been racially motivated.

Unlike the vandalism, the noose incident was immediately classified as a hate crime. According to Virginia law, leaving a noose on public property is a felony.

The Cavalier Daily, UVA’s student newspaper, reported that security footage from that evening shows a male wearing a dark-colored jacket and jeans climbing the statue and placing the noose around Homer’s neck. Timothy J. Longo, the university’s vice president for security and safety and chief of police, said the crime occurred at 11:15 p.m. on September 7 and was reported to the campus police at 4:20 a.m., when an officer was patrolling the Lawn.

“My day was put on hold,” Pittman said. “I got messages literally all day nonstop. There was a lot of confusion. And it was hard to go to class and ignore what was being said about this incident.”

That afternoon, James E. Ryan, UVA’s president, sent a university-wide email explaining that a noose is a symbol of violence against Black people. “There is simply no place in our community for this type of conduct, and we will undertake every measure to find out who did this and to hold them accountable,” he said.

About a week after the hate crime, students started to hear a rumor that more items had been left alongside the noose, including a document with the words “tic-toc.”

But on September 15 the university’s police provided a sharply limited description of other items that had been left with the noose. “There was no substantive note that reflected any threats, motive, or information that warranted notification to our community,” Sgt. Ben Rexrode said, citing the needs of the investigation.

The UVA community didn’t know that other items had been left behind until students pressed the campus police to release more information, Pittman said.

The distinct disappointment is the sense that university leadership is not being fully transparent and fully proactive in communicating.

But Black students told The Chronicle that they needed to know whatever else had been found at the scene for their own safety. A document or object that might not appear as a threat to others, they said, could still be a coded racist threat.

“I became worried about my safety,” said Julissa Bishop, a third-year student. “I honestly thought, ‘A noose and something else? What else could there be?’” She started to think about the possibility that the documents could contain additional threats to the Black community.

“Every time something happens on campus — robbery, shooting, or any type of crime — they always email us,” Bishop said. “And so in my mind we have the right to know, but they held certain things from us.”

“It’s easy to ignore this,” she added, “when you’re not the person that the hate group or person is coming after.”

Students were also confused when local news outlets published a photo of the suspect. The university has not released any footage or photo.

“As is common in the investigation of a potential hate crime, we are working with our local FBI partners to enhance the video and develop information related to the incident,” a university spokesperson said in a written statement.

While the university’s Carter G. Woodson Institute for African American and African Studies and its Office of African American Affairs hosted a teach-in about vandalism and hate crimes against Black communities this month, many Black students have spoken up about the need for transparency from the UVA administration. Online, they are using the hashtag #blackoutUVA to bring attention to the issue.

In an open letter to the university’s president and administrators, published on Saturday by The Cavalier Daily, Black students demanded full transparency about the items found with the noose.

“Black students need transparency and urgency. The silence and inaccuracy of information from the administration are explicit acts of collusion against the safety and well-being of Black students and Charlottesville community members,” they wrote. “Apathetic silence in the face of explicit anti-Blackness and the threat of racialized violence does not contain the problem of white supremacy. It does not protect Black students — in fact, it actively frustrates Black student efforts to mobilize, organize, and hold space for healing.”

In addition to transparency, Black students are demanding a university-wide town hall to address the hate crime and an increase in spending on mental-health resources. The students also want the university to acknowledge demands written by the Black Student Alliance in the 1970s that haven’t been addressed to this day.

The open letter ends by stating: “These demands warrant no committees. No task forces. No bureaucracy. Only our voices met with action. Signed, Black U.Va.”

Robert Trent Vinson, director of the Woodson Institute, said that “the distinct disappointment is the sense that university leadership is not being fully transparent and fully proactive in communicating. And students found out about the note in some fashion, but it did not come initially from an official statement from a university official. That did give a sense that there’s information that’s being withheld.”

Vinson also said that many Black students expect Black faculty and staff members to know more, but they don’t know any more than what the students know. “We’re left trying to fill a leadership vacuum without the necessary information to be able to act in an informed way and to be the most helpful we can to our students,” he said.

UVA’s enrollment is 6 percent Black. Nevaeh Hodges, a second-year student, said that although the community is small, students are coming together. “It has definitely been an inspiring experience to see how quickly we all reached out to each other, mobilized, started strategizing and making plans,” she said. “It’s inspiring to see that I am a part of a community that will stand up for ourselves and that will actively fight for change.”

Previous articleThe Supreme Court Ordered Yeshiva U. to Recognize an LGBTQ Group. Then Things Took a Turn.
Next articleThe world is moving closer to a new cold war fought with authoritarian tech
- Advertisement -