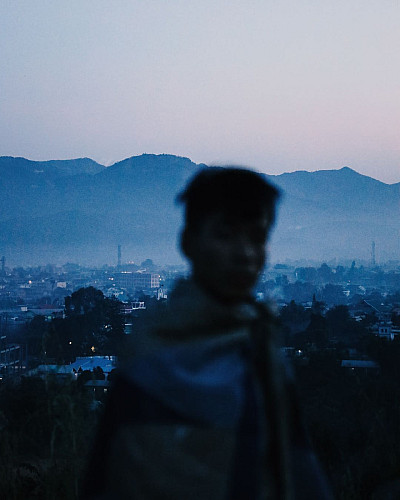 In line with our endeavour to spotlight sustainable communities, we trained our lens on Lamka and its ingrained culture of circularity. “For the people of Lamka, living sustainably comes as naturally as breathing. Doing their part for the planet, however, hasn’t exempted them from facing the consequences of climate change,” rues Delhi- and Goa-based photographer Bhumika Sharma, who derived inspiration from the local tradition “of living consciously yet unconsciously”.

In contrast with the visible and invisible effects of urbanisation are the traditional knowledge systems that dovetail with the rich tapestry of colours that form the backdrop of life here. “We wanted to document how the residents of this Manipuri town continue to live among casually kept piles of ghost peppers, corn and fermented rice. How the red soil looks against the fluffy clouds, the sunset over the Tuitha river, the scent of the crisp hilly air. And how, everywhere we went, we found whole households growing herbs and fruits in their yards,” says Sharma.

Taking centre stage in Lamka are the indigenous people, who epitomise the art of coexisting — alongside each other as well as nature. “Here, we are all each other’s keepers. Whenever my mother would prepare a special meal, we would make it a point to share it with our neighbours. And some of my favourite pieces in my wardrobe are the ones passed down by older siblings. We are constantly thinking of how to repurpose: for example, old woollen clothes are deconstructed and rewoven; cushion covers are turned into patchwork shawls or throws by mothers,” says stylist and Lamka local Manglien S. Gangte. “Each tribe has its own language, but communication is never halted because the population is largely multilingual,” adds Sharma.

The personal style of Lamka’s youth reflects the inherent culture of inclusion and ethical consumption that they are born into. “Think borrowed denims with poked holes and trimmed hemlines — an effortless style statement that is indicative of their personal belief systems. Lamka is free-flowing, like Leh Studios, the Delhi-based label featured in the shoot. The clothes from the zero-waste label are very versatile. Leh, which is almost like an extension of the designer Himi’s mind, reflects his raw point of view and clear design language. Deconstructed jeans, fuss-free crop tops, garments for all shapes and sizes,” states Manglien, adding, “The name Lamka was coined by the first inhabitants of the land. It literally translates to ‘many paths’ in the local Zo dialect. For the longest time, the markets of Lamka were filled with clothes from South Asian markets. These were not just discarded after a wear or two and are still passed down to favourite sisters, nieces, nephews and children. Naturally, any garment that has lived many lives and has many stories is of value. This ethical practice of giving clothes new life is sewn into the minds of the people where people value, enjoy, live in and pass on items of clothing.”

Featured in the shoot are Khualboi Thawmte, who is currently studying design at NIFT Mumbai, and Goumalsawm Gangte, an undergraduate student at Churachandpur College in Lamka, both of whom hail from Lamka. Pervading the shoot — “an ode to my roots,” says Manglien — is a sense of nostalgia, which ties the natives — who share a deeply intimate relationship with their land, river and tribe — to Lamka, even after they migrate to bigger cities in search of greener pastures. “It is a homage to the fading memories that flash by in your mind’s eye when you fleetingly recall your childhood in a faraway land and time,” he says. The quality is heightened by the clothing, given that Himi’s vision for Leh — which is rooted in the “think global, act local” philosophy — is also similarly informed by his memories of growing up in Farrukhabad.

In recent times, the term “sustainable” has increasingly been co-opted by brands in an attempt to greenwash their image and sway consumer sentiments informing purchases. “The ever-evolving world of fashion is continuously adopting new trends and the latest hype is about sustainability. It provides brands with a unique value. But although the buzzword may be relatively new, sustainability has been a way of life through the ages in many ancient cultures, as Lamka illustrates,” remarks Sharma.