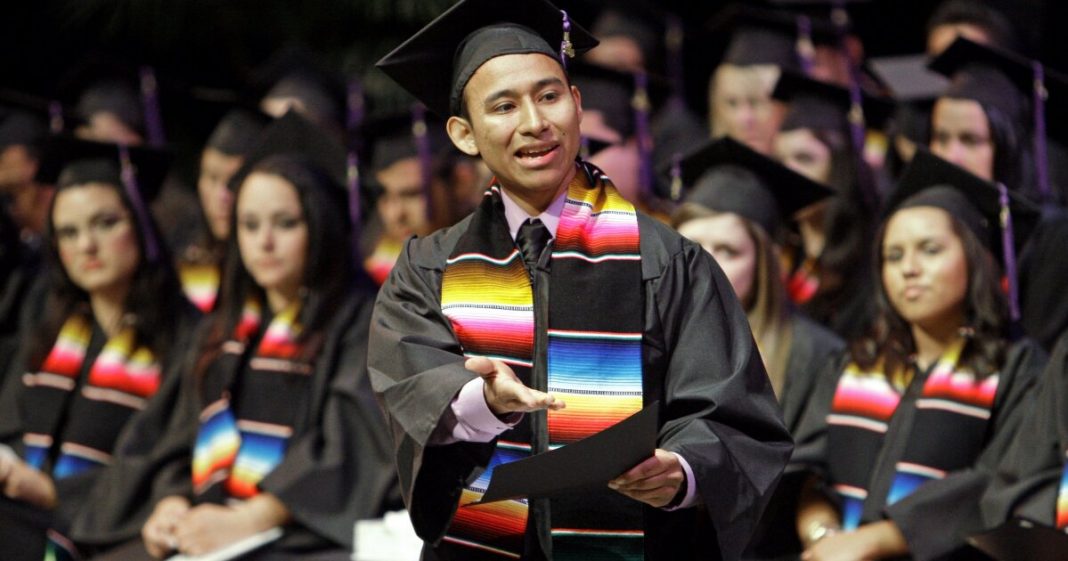 
Racial and gender-based disparities in college-going rates disappear when students receive similar levels of academic preparation in high school, according to a new study by the Brookings Institution. The findings highlight a potential path forward for college leaders who are eager for solutions to their enrollment problems.

Although college-enrollment gaps for students in different socioeconomic brackets are alleviated when they receive the same level of academic preparation, wide disparities still exist.

The analysis also looked at gender disparities; it’s been well documented that women are more likely than men to go to college. Among students with similar levels of academic preparation, men and women enrolled in college at similar rates.

The study comes from Brookings’s Center on Children and Families , which analyzed data from the High School Longitudinal Survey of 2009 , a survey of over 23,000 students who were in ninth grade that year. Students were surveyed several times during high school and early adulthood, and took a standardized math exam in their expected ninth- and 11th-grade years.

The survey records were linked to data from high-school transcripts and college enrollment records, as well as surveys completed by the students’ parents or guardians, school administrators, counselors, and teachers, according to the report.

Sarah Reber , a senior fellow at the Brookings Institution and one of the authors of the report, said that the report’s findings show that closing gaps in academic preparation during high school is key to making progress on college-enrollment disparities.

“Public discussions about inequality in access to college often center around admissions and cost,” Reber wrote in the report. “While these issues are important, our findings suggest that policy makers should also pay careful attention to disparities in academic preparation earlier in students’ educational careers, which are important determinants of college enrollment.”

For students from different economic backgrounds, improving academic preparation is a key way to tackle college-enrollment gaps, Reber said, as is reducing the cost of attendance and making the admissions process less confusing.

Reber said in an interview that Brookings determined “academic preparation” using factors including overall grade-point average from high school, separate grade-point averages for math and English, the number of Advanced Placement or International Baccalaureate courses taken, the highest-level math course taken, and the math score students received on the standardized test administered as a part of the survey.

Reber emphasized that the report is silent about the source of the gaps in academic preparation. But other research has shown that students’ academic-preparation levels are determined by factors outside of school as well as within it, she said.

“From a policy perspective, it’s not clear whether you want to be focused on in-school or out-of-school factors,” Reber said. “Things like family income, violence, racism, environmental toxins in the community — all of these things could be contributing. So it’s important to keep that in mind.”

Nathan Grawe , a professor of economics at Carleton College who studies the connections between family background and educational outcomes, said the Brookings report is important because it reveals information about the causes of racial and gender enrollment disparities.

“If we’re going to make progress on mitigating those gaps, we need to fully understand where they occur,” Grawe said. “This research, for instance, makes clear that it’s not that the differences emerge at the very last moment in the process, when students are age 18.”

College leaders shouldn’t draw the conclusion that these academic gaps are K-12 problems, Grawe said. In order to reduce enrollment disparities, he said, college administrators should collaborate with primary and secondary educators to expand access to academic preparation earlier on.

“A better conclusion would be one that underscores the importance of higher education collaborating with K-12 in all sorts of ways,” Grawe said.

Colleges have to focus on adapting and meeting students where they are, Grawe said, “so that even if they don’t have the preparation that we might ideally hope for, they nevertheless can find a path into and through higher education.”

Previous articleNative American Languages Are Disappearing. Colleges Could Help Preserve Them.
Next articleThese simple design rules could turn the chip industry on its head
- Advertisement -

The U. of Iowa Leased Its Utilities Operations for $1 Billion. Now, Its Partner in the Deal Is Suing.