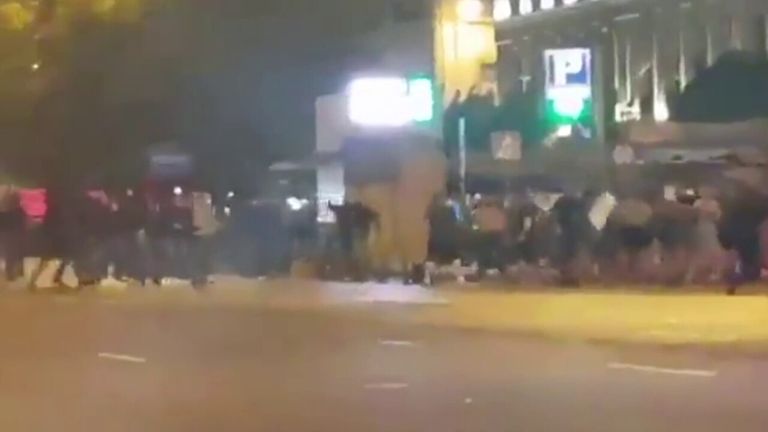 
West Ham fans have been involved in running clashes with Eintracht Frankfurt supporters ahead of their Europa League last-16 tie against Sevilla on Thursday.

Footage on social media appeared to show a group of Frankfurt fans, also in Seville after their team played Real Betis in the Europa League on Wednesday night, march towards West Ham supporters outside a bar, before bottles and chairs were thrown by both sets of fans.

West Ham manager David Moyes had said on Wednesday that up to 10,000 Hammers fans were travelling to the Spanish city for the first leg of the club’s Europa League last-16 tie, despite the east London club only receiving an official allocation of 3,000 tickets from UEFA.

Sky Sports News have contacted police in Seville for a comment.

What happened in Seville?

“There were pretty ugly scenes here last night in the Paseo de Cristobal Colon region of Seville, on the City’s riverbank. A group of West Ham fans were drinking outside an Irish pub and were approached by Eintracht Frankfurt supporters, armed with weapons, chairs, bottles, sticks.

“The pictures on social media don’t make for good viewing. It looked like the West Ham fans retaliated with bottles themselves before the police turned up and managed to disperse the fans. There’s lots of glass here left over on the street from the night before. We’ve approached the police for comment for confirmation regarding injuries.”

Ahead of their Europa League tie against Sevilla, a group of West Ham and Eintracht Frankfurt fans clashed after the German side’s win over Real Betis.

“Questions need to be asked of UEFA. Originally, Eintracht Frankfurt were scheduled to face Real Betis in Seville on Thursday, the same day as the Sevilla vs West Ham game. UEFA decided to move the match a day earlier.

“I’ve been here for a couple of days and there have been Frankfurt and West Ham fans in the city; there’s only a certain number of flights to bring the fans to the city, so many of them arrived a couple of days earlier. Remember, 10,000 West Ham fans are expected in Seville, that’s despite the club only having 3,000 tickets for the match itself.

“There’s going to be a lot of supporters watching the game in bars in the city, and you would think there would still be some Frankfurt supporters still here.

“With home fans from Sevilla and Real Betis, that’s four clubs in the city across a 24-hour period for two games and has kind of set something up. But despite all of that, these are not scenes we want to see, and we hope there are no repeats of it throughout the day.”