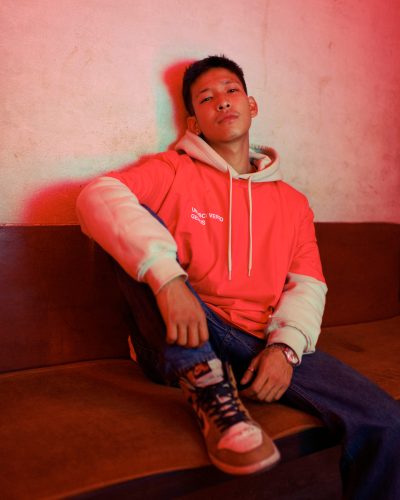 “Gangtok is a small town, densely populated and heavily built. The main town centre is a stretch called M. G. Marg, which is lined with coffee shops, bars, pubs and bakeries, all catering to the tourists who throng the hill station for holidays, honeymoons, etc. It’s a business-oriented town that largely depends on the tourism industry.

Sharing borders with Nepal, Bhutan, Tibet Autonomous Region and West Bengal to the south, a lot of contraband goods would come into Gangtok in earlier times. Ranging from branded merchandise and pirated music to sneakers and sports jerseys – all the stuff that you wouldn’t find in the mainstream Indian market would somehow be accessible in the North-Eastern region. This influx of goods carried with it a cultural significance, creating an arc of influences that would continue to determine the preoccupations of young people for generations to come – right from my growing-up years in Gangtok all the way to the present moment in time. It manifested interests in genres of music like hip-hop, heavy metal and K-pop, fashion, skateboarding, etc, the last being a recent phenomenon that is about four years old max. Inclination towards these cultural commodities, which were primarily Western and street at the same time, brought about shifts in perceptions and dynamics: it was considered just a phase and not encouraged by society at large. But for the younger folks, it was a slow town that was much too small for their ambitions, and turning inwards towards one’s own interests was the way to pass time here. While a segment of the youth turned to drugs, others focused on a healthier alternative: nurturing passions that could ultimately translate into livelihoods.”

SHE’S ALL THAT: SINGER-SONGWRITER DOT. IS BACK IN FULL SWING