Who will replace Russian Formula One driver Nikita Mazepin? 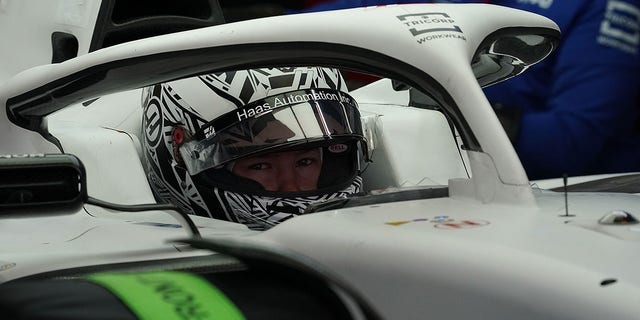 Haas F1 driver Nikita Mazepin is in an awkward situation.

The 22-year-old Russian is the son of Dmitry Mazepin, who controls the team’s sponsor Uralkali, which is based in Russia and is one of the world’s largest fertilizer companies.

Dmitry Mazepin (R) met with President Vladimir Putin (L) in January in his role as  CEO of Uralchem, which holds a controlling stake in Haas F1 sponsor Uralkali.
(Mikhail MetzelTASS via Getty Images)

American-owned Haas temporarily removed the Urakali name and the colors of the Russian flag from its two cars during testing last week in response to the invasion of Ukraine as it assesses the situation.

“There are legal issues we have to go through and then we see what comes out,” team principal Gunther Steiner told Sky Sports.

Haas removed Uralkali sponsorship and the colors of the Russian flag from its cars during testing in Spain last week.
(AP/Getty Images)

Haas was last among Formula One constructors in 2021 as it chose to reduce its investment ahead of the all-new car being launched this season, and Mazepin finished behind his teammate Mick Schumacher 11 of 14 times they both completed a race.

If he needs to be dropped as a result of his relationship to Uralkali, Mazepin set to be replaced initially by the team’s reserve driver, Pietro Fittipaldi, grandson of two-time Formula One champion Emerson Fittipaldi.

“If Nikita couldn’t drive for one or another reason, the first call would go to Pietro,” Steiner told Speed City Broadcasting.

Every F1 team has one or more reserve drivers on call in case something happens to their primary drivers. Fittipaldi has already raced twice for Haas in 2020 after then-team member Romain Grosjean was injured in a crash.

“Obviously, [Pietro has been] with us for a few years, and then we would see what we do next.”

Competing in Formula One requires an FIA Super License, which is based on experience and performance in other racing leagues, and the list of eligible drivers is relatively short.

In fact, even as he is on Haas, Schumacher serves as one of the Ferrari F1 team’s reserve drivers, and could potentially get called up by the Italian team for one or more races this season, which would also open a seat at Haas for Fittipaldi.

The Formula One season is scheduled to begin on March 20 in Bahrain.