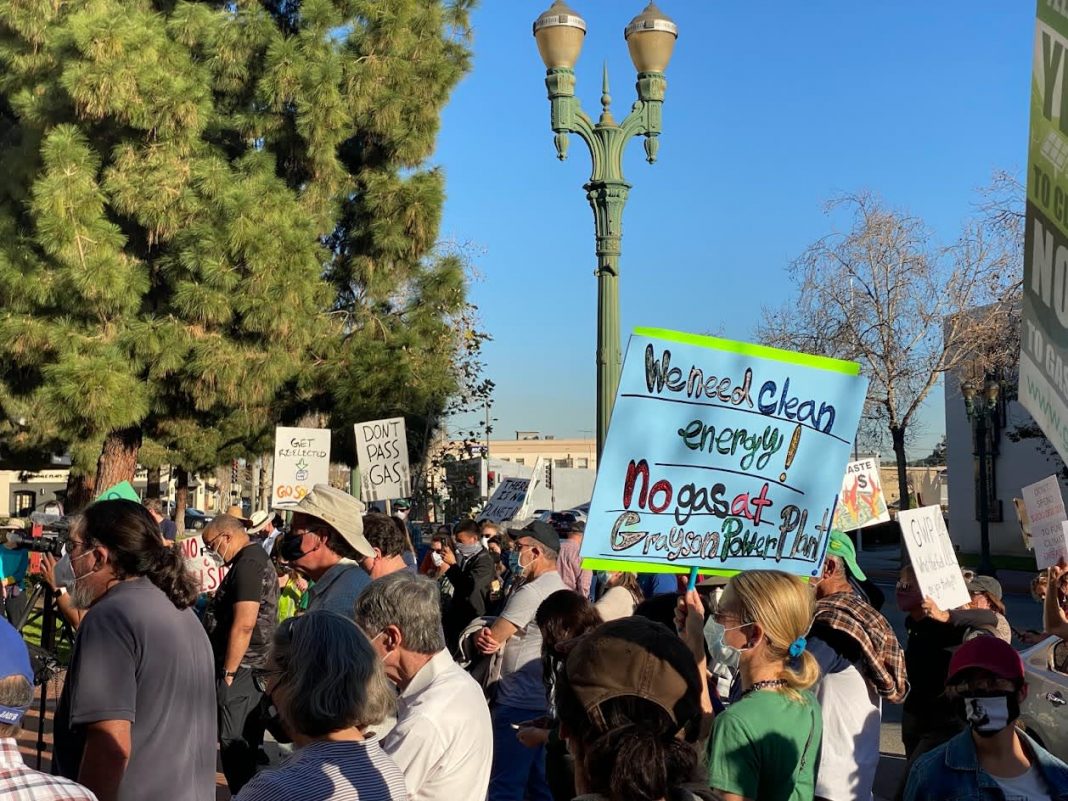 People gathered in Glendale in February to protest the city’s approval to build a fossil-fueled power plant.

Glendale, a Los Angeles suburb that’s home to Walt Disney Imagineering and the famous Brand Boulevard, could be the last city in California to build a fossil-fueled power plant. The move has angered residents and environmentalists who have urged the city to invest in clean energy to slow the climate crisis.

Glendale has proposed to spend $260 million on five new natural gas-powered generators that will produce about 93 megawatts at the Grayson Power Plant, enough to power a midsize city. The decision comes after the state passed legislation requiring 100% clean energy by 2045.

The ongoing debate over the plant highlights a broader issue over how California must figure out how to eliminate planet-warming fossil fuels while continuing to power communities, an effort utility providers say will require continued investment in natural gas. The electricity sector accounts for about 16% of California’s greenhouse gas emissions, according to the California Air Resources Board.

Environmentalists have pointed out that the power plant is less than a mile from several schools, childcare centers and other community centers and will increase greenhouse gas emissions in a city already suffering from poor air quality. They argue that the plant would lock in more pollution for years to come and that investment to fund the new generators is a waste as the state transitions to cleaner energy sources.

But Glendale Water & Power, the local state-run utility, has argued that its proposed thermal generation would only run at 14% capacity — significantly less polluting than the gas engines in place now — and provide vital back-up power for the city. The new generators, it said, will provide power in the event that transmission lines are shut down to mitigate wildfire risk, as well as supply air conditioning during unbearable heat waves.

This week, the city council voted for an amendment to pause any purchase of gas-fired units until the end of the year, a move environmental groups said was just a temporary delay but praised as a step in the right direction.

Mark Young, the general manager of Glendale Water & Power, said the delay was disappointing and failed to consider the importance of providing reliable thermal generation for the city when residents need back up power.

“My job is to make sure that everyone has enough electricity when they need it. It feels like I’m the big bad wolf who loves thermal generation,” Young said. “I don’t – I love reliable generation.”

“Our portfolio keeps gas generators on only when we need them in the event of a problem,” Young said. “We’re trying to balance the needs of the environment and needs of the residents for reliable favorable energy.”

The Grayson Power Plant is located on the border of Glendale and Burbank.

As part of a broader assignment from the city to invest in clean energy, Glendale Water & Power is working to implement 75 megawatts of battery energy storage at the power plant. The utility is also working on a virtual power plant that would produce 28 megawatts of solar energy by installing solar panels and batteries at homes and apartments throughout the city.

Young said that the utility’s clean energy options are maxed out, due mostly to the fact that it doesn’t have enough transmission capacity on power lines to bring in energy sources from outside the L.A. Basin.

“We’re being extremely progressive in our vision and we’re not getting credit for it,” Young said. “Natural gas is supposed to be a bridge to get to 100% clean energy.”

But environmental groups don’t buy it.

Byron Chan, an associate attorney for the environmental law firm Earthjustice, said that more than 400 residents mobilized and protested the utility’s proposal to burn fossil fuel in 2018. Since then, the utility still hasn’t fully addressed the concerns of the community, he said.

“Given what we know about emissions from natural gas, it’s incredulous that in 2022 we’re making investments in fossil fuel when there are clean energy options that are decreasing in price and becoming more and more readily available,” Chan said.

Environmental groups have also argued that the proposed gas engines won’t be able to run after the 2045 deadline and will therefore become stranded assets. However, Glendale Water & Power has argued the utility will eventually be able to run the units on green hydrogen, which is made from the electrolysis of water powered by solar or wind and is still in its infant stage.

Morgan Goodwin, a Glendale resident and the senior director of Sierra Club’s Los Angeles chapter, said the main fight over the power plant is whether or not fossil fuel production plays a role in the solution to climate change.

“The answer is clearly no,” Goodwin said. “But the messaging we get from the fossil fuel industry is still touting bridge fuel benefits. If our elected leaders are willing to say ‘No fossil fuels means no fossil fuels,’ then that’s the example of what we want to see nationally.”

“We’re asking Glendale Water & Power and other utilities to make some deep changes to how they operate,” Goodwin said. “This is their opportunity to demonstrate leadership and courage.”