Why Do Students Haze in Fraternities? A New Study Challenges Conventional Wisdom 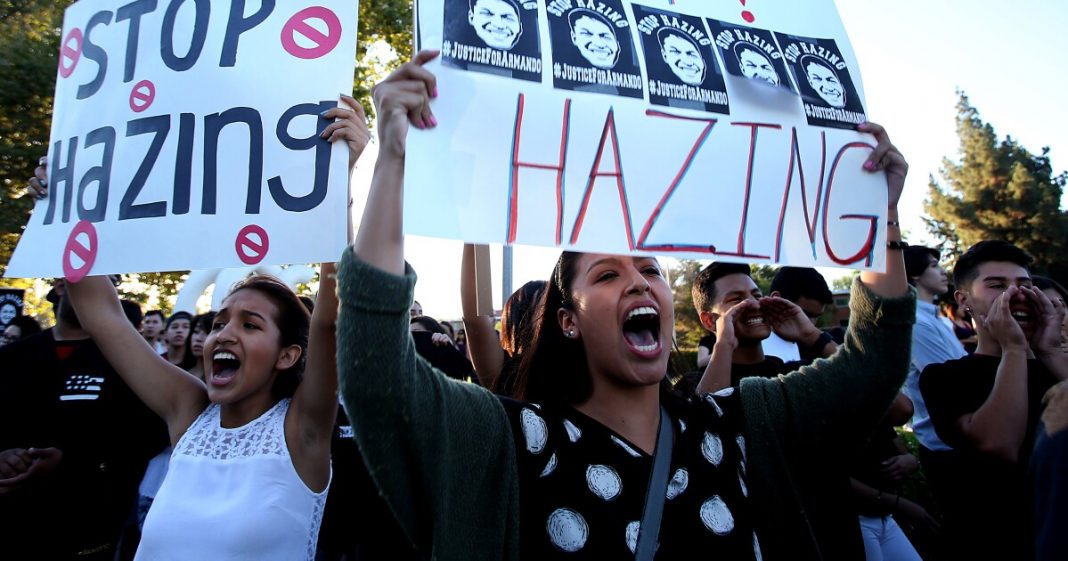 
For years, as colleges have tried to curb hazing in student groups — particularly fraternities — operatngi under the assumption that a key reason these organizations haze is to build group solidarity. That understanding has informed research, college position statements, and news coverage.

But a new study published in the journal Evolution and Human Behavior suggests that there is no strong connection between fraternity hazing and group solidarity. In other words: Going through hazing rituals, such as intoxication, deprivation of food or water, and humiliation, doesn’t necessarily increase trust and social glue among students in a fraternity.

Aldo Cimino, an assistant professor of anthropology at Kent State University, and Benjamin J. Thomas, an industrial and organizational psychologist at the University of Texas at Austin, followed six fraternity pledge classes as they progressed through an anonymous U.S. fraternity’s process for inducting new members.

Cimino said their research is one of few real-world studies of fraternity behavior. “The fact that this got done is improbable,” he told The Chronicle. “Everything is aligned against doing this kind of work — hazing is illegal, it’s against university policy, and it’s against fraternities’ policies. At every possible level, there is resistance.”

He said his main goal was to examine fraternity activities, not cast judgment on them. In order to gain the fraternity’s permission to conduct research, the authors couldn’t ask about the specific kinds of hazing that pledges experienced.

These are the kinds of reports and results that everyone within the fraternity- and sorority-life community and adjacent fields wants to hear.

The study’s findings could shape college leaders’ understanding of the motivations behind hazing and influence their efforts to thwart hazing, which has come under heightened scrutiny in recent years with the deaths of fraternity pledges and debates about anti-hazing legislation in some states.

Jana Mathews, a professor of English at Rollins College and an expert on Greek-letter organizations, said the findings are promising because they suggest that students may be becoming less tolerant of inappropriate behavior.

“These are the kinds of reports and results that everyone within the fraternity- and sorority-life community and adjacent fields wants to hear,” said Mathews, who just wrote a new book about the groups, The Benefits of Friends (University of North Carolina Press, 2022).

The students involved in Cimino and Thomas’s study filled out surveys at five points during the 10-week period of pledging the fraternity, rating the harshness and fun of the process and their feelings of solidarity within the group. Researchers measured solidarity in seven different ways, including how much the students liked their pledge class and how dedicated they felt to it.

Then what, one might wonder, is the point of something as unpleasant as hazing? The authors suggest that the motivation for hazing may instead be to weed out less-committed fraternity pledges and control “free riders” who try to reap the benefits of fraternity membership without putting in the work.

Still, the authors warn against concluding outright that hazing doesn’t generate any feelings of solidarity.

“There’s a danger that people will run with this in the wrong way,” Cimino said. “The wrong, unproductive way is to go in front of fraternities and tell them that hazing doesn’t work and they need to go have fun. You’re going to lose their respect.”

Mathews said she believes that hazing does build solidarity — even if it’s not the kind of solidarity colleges want. Negative and traumatic experiences have been shown to bond people, she said.

Another reason fraternities haze, Mathews said, is tradition. It has become an expected part of the Greek-life experience.

“When you think of the fraternity experience, there are a couple of boxes that you need to check to consider yourself a full-fledged member,” she said. “Those are culturally inscribed. One is drinking, one is hazing, and the other one is living in a house surrounded by men of the same age.”

Mathews said that while the study offers only early evidence of a disconnect between hazing and solidarity, it suggests an opening for colleges to work with Greek-letter organizations to encourage alternatives to hazing rituals.

“That’s going to take time,” she said. “It’s a work of culture and a work of practice.” What’s more, scholars and practitioners shouldn’t assume that fraternities will simply stop hazing.

“It’s important to remember that students don’t typically change their behavior based on the information given to them in statistics or through these kinds of studies, but through their own experiences,” Mathews said. “If this bears out, the possibility is that we can use the data … and the information to help change student experience or encourage that change of experience.”