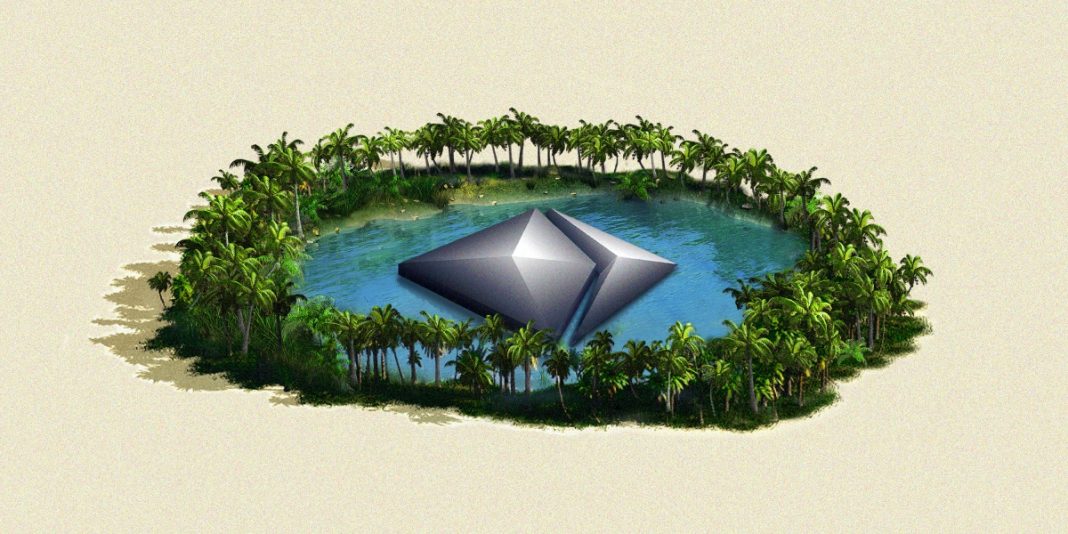 
In Bitcoin’s proof of work, that investment is hardware. Roughly every 10 minutes, Bitcoin miners compete to solve a puzzle. The winner appends the next block to the chain and claims new bitcoins in the form of the block reward. But finding the solution is like trying to win a lottery. You have to guess over and over until you get lucky. The more powerful the computer, the more guesses you can make.

Sprawling server farms around the globe are dedicated entirely to just that, throwing out trillions of guesses a second. And the larger the mining operation, the larger their cost savings, and thus, the greater their market share. This works against the concept of decentralization. Any system that uses proof of work will naturally re-centralize.

In the case of Bitcoin, this ended up putting a handful of big companies in control of the network.

Since early on in Bitcoin’s history, though, crypto enthusiasts have searched for other consensus mechanisms that can preserve some degree of decentralization—and aren’t as wasteful and destructive to the planet as proof of work.

How proof of stake works

Proof of stake, first proposed on an online forum called BitcoinTalk on July 11,  2011, has been one of the more popular alternatives. In fact, it was supposed to be the mechanism securing Ethereum from the start, according to the white paper that initially described the new blockchain in 2013. But as Buterin noted in 2014, developing such a system was “so non-trivial that some even consider it impossible.” So Ethereum launched with a proof-of-work model instead, and set to work developing a proof-of-stake algorithm.

Proof of stake does away with miners and replaces them with “validators.” Instead of investing in energy-intensive computer farms, you invest in the native coins of the system. To become a validator and to win the block rewards, you lock up—or stake—your tokens in a smart contract, a bit of computer code that runs on the blockchain. When you send cryptocurrency to the smart contract’s wallet address, the contract holds that currency, sort of like depositing money in a vault.

In the proof-of-stake system Ethereum is slowly moving to, you put up 32 ether—currently worth $100,000—to become a validator. If you don’t have that kind of spare change on hand, and not many people do, you can join a staking service where participants serve as validators jointly.

An algorithm selects from a pool of validators based on the amount of funds they have locked up. The more you stake, the greater your chance of “winning the lottery.” If you’re chosen and your block is accepted by a committee of “attestors”—a group of validators randomly chosen by an algorithm—you are awarded newly minted ether.

Ethereum’s proponents claim that a key advantage proof of stake offers over proof of work is an economic incentive to play by the rules. If a node validates bad transactions or blocks, the validators face “slashing,” which means all their ether are “burned.” (When coins are burned, they are sent to an unusable wallet address where nobody has access to the key, rendering them effectively useless forever.)

Ethereum’s proof-of-stake system is already being tested on the Beacon Chain, launched on December 1, 2020. So far 9,500,000 ETH ($37 billion, in current value) has been staked there. The plan is to merge it with the main Ethereum chain in the next few months.

Other upgrades will follow. After the blockchains merge, Ethereum will introduce sharding, a method of breaking down the single Ethereum blockchain into 64 separate chains, which will all be coordinated by the Beacon Chain.

Shard chains will allow for parallel processing, so the network can scale and support many more users than it currently does. Many see the inclusion of shard chains as the official completion of the Ethereum 2.0 upgrade, but it’s not scheduled to happen until 2023.

Later on, a technique called “rollups” will speed transactions by executing them off chain and sending the data back to the main Ethereum network.

None of this comes without risks. Ethereum’s switch to proof of stake is an enormous undertaking. Thousands of existing smart contracts operate on the Ethereum chain, with billions of dollars in assets at stake.

And though staking is not as directly damaging to the planet as warehouses full of computer systems, critics point out that proof of stake is no more effective than proof of work at maintaining decentralization. Those who stake the most money make the most money.

Proof of stake also hasn’t been proven on the scale that proof-of-work platforms have. Bitcoin has been around for over a decade. Several other chains use proof of stake—Algorand, Cardano, Tezos—but these are tiny projects compared with Ethereum. So new vulnerabilities could surface once the new system is in wide release.