Why More Undergraduates Are Unionizing 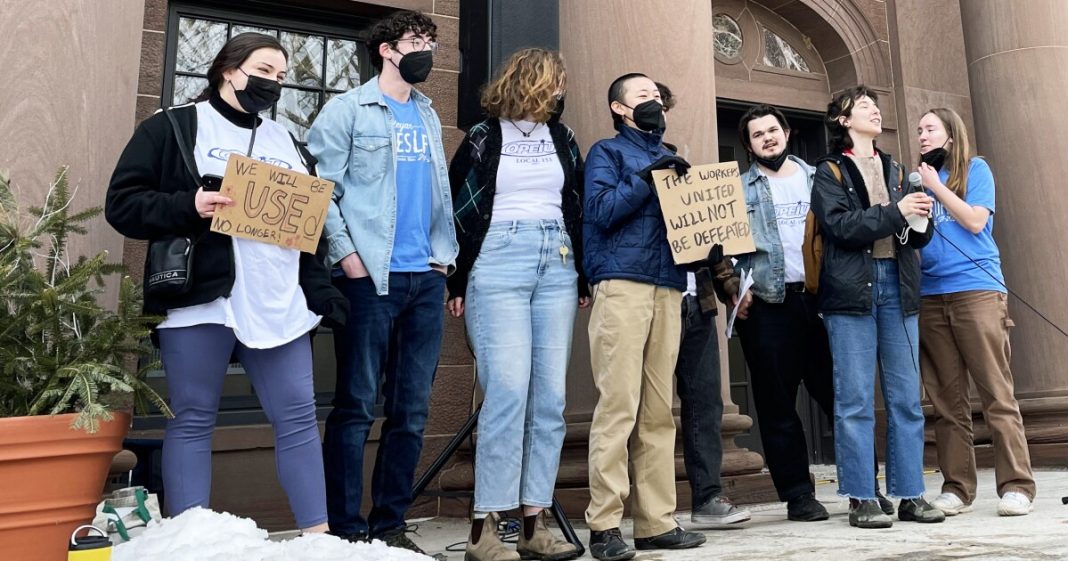 
Amid pandemic-related stressors affecting many workers and an uptick in collective action across higher ed, a small but growing number of undergraduate employees are trying to unionize. Resident assistants at Barnard College joined the movement on Monday, announcing that they were filing for union recognition.

The Barnard students were inspired by RAs at Wesleyan University, who secured recognition from administrators on the Connecticut campus in March. The Wesleyan Union of Student Employees became one of the few exceptions to the rule: Due to challenges in preserving momentum as students graduate every year and amid pushback from administrators, it is difficult for undergraduates to form a union.

But Grace Reckers, a representative of the Office and Professional Employees International Union who has helped the Wesleyan and Barnard organizers, said she hopes the tide is turning. “People are realizing that they’re working way more than they’re paid, or that they’re producing more for their college or institution than they are necessarily being recognized for,” she said.

Since Wesleyan’s union was recognized, Reckers said, students at 13 other colleges had reached out to her about unionizing.

Student-housing employees at Mount Holyoke College filed for union recognition last week with the United Food and Commercial Workers International Union. RAs on the Massachusetts campus have been organizing since the spring of 2021, when they won a wage increase, from a base salary of $4,400 to $7,493. But students told The Chronicle that the increase hadn’t been proportional to the new responsibilities they were given this year. RAs at Mount Holyoke do not receive subsidized housing, as many of their counterparts elsewhere do.

“This unionization effort is not an act of defiance,” a statement on their Instagram page reads. “Rather, it is a long-term commitment to ensure our progress will not regress.”

In a statement sent to The Chronicle, a Mount Holyoke spokesperson said that college officials “greatly appreciate the hard work and dedication” of their student employees and “support the right of workers to choose what they believe is best for them.” The officials added that “out of respect for the formal process associated with this request, we do not have further comment at this time.”

Although unions have recently been gaining traction in retail, food industries, and higher ed, resident assistants who want to form unions face barriers. RA jobs are often structured as campus-leadership positions, akin to being a club president or a student-government member.

But the demands of being an RA are extensive. The students are often expected to guide their residents — largely but not exclusively freshmen — through the adjustment to college, serve as first responders to mental- and physical-health crises, and solve interpersonal problems among roommates, all with only a few weeks of training. Stresses related to the pandemic and mental-health concerns placed on RAs prompted many students to strike or quit their positions altogether.

Though there’s been a rise in undergraduate-unionization efforts over the last few years, Timothy R. Cain, an associate professor of higher education at the University of Georgia who studies campus labor issues, said the number of successful campaigns remains limited.

‘A Radicalizing and Polarizing Event’

When Wesleyan students returned to campus in the fall of 2020, with the pandemic raging, student employees became frontline workers. Because of the increased risks they took on to perform their roles, Ruby Clarke, a junior at Wesleyan and student-housing worker who has helped with union efforts, said the students had sought hazard pay in a letter to administrators accompanied by a petition with 500 signatures. Clarke said administrators hadn’t replied to students’ repeated messages. (Wesleyan did not respond to a request for comment.)

Instead of the $250 in hazard pay they asked for, Clarke said, they were given fuzzy socks.

“The underscoring moment,” Clarke said, is the residential-life administrators just “treating their staff in a way that feels like a sitcom joke. It feels like you’re being pranked.”

But the breaking point, Clarke said, was when a dorm flooded last fall. After RAs spent the day moving freshmen into their rooms, hundreds of students had to be evacuated. Clarke said RAs were overwhelmed and felt unprepared to deal with the flooding. RAs, many of whom were working their first night shift, escorted students to the university’s gym and were expected to watch over them all night.

“That’s a radicalizing and polarizing event, and that’s the first day of work,” Clarke said. “That really made it easier for us to show, ‘Hey, we are being mistreated.’”

After gathering support for several months, the RAs announced their intention to unionize with a petition that drew more than a thousand signatures from students, alumni, faculty members, and local elected officials. Within three weeks, the university said it would recognize the union — a striking move considering that negotiations between employee unions and colleges typically last months or years. Wesleyan’s union is believed to be the first confirmed union of undergraduate workers in the country to be voluntarily recognized by its university.

Before Wesleyan’s RA union gained recognition, there were few examples of successful union campaigns by undergraduate workers. Unions have formed at Kenyon College and Grinnell College within the last few years. University of Massachusetts at Amherst students have sustained a resident-assistant and peer-mentors union for the last 20 years.

That small number reflects the difficulty of unionizing in general. And for undergraduates, many of whom plan to spend only four years at their institution, it can be especially difficult to build a movement for the long term, said Cain, the Georgia professor.

Even when one group of students is determined to organize, the transient nature of student-worker positions also presents challenges. There is a limited window of time for institutional knowledge to be passed down to the next class of student workers, said Chadwick Gasman, who in 2018 helped lead Georgetown University’s RA-union campaign as an undergraduate. It’s also difficult to build community and foster a sense of trust when students are primarily on campus to receive an education, and have many competing priorities.

“The go-to tactics for busting a union are to divide, delay, and distract. And the big one affecting student workers is delay,” said Gasman, who’s now a professional union organizer with the Service Employees International Union but was not speaking on its behalf.

College officials often push back against union efforts by emphasizing that undergraduate and graduate workers are not employees but “students first,” even though “the work that they’re doing is often real work that qualifies them as employees,” Cain said.

‘A Seat at the Table’

Katie Cherven, a senior at Barnard and RA-union organizer, said a key reason for the unionization effort is that attempts to work directly with the college’s administration on student workers’ concerns have often been unproductive.

“Things change, and communities change, and the group of RAs will change,” Cherven said. “We are looking for a seat at the table indefinitely.”

After sending a petition to Barnard officials, Cherven is optimistic that they will voluntarily recognize the union because of the New York institution’s justice-oriented values. But she said the organizers would consider a strike if the college didn’t recognize the union by the end of this week.

In a statement sent to The Chronicle, a college spokesperson said: “Barnard deeply values our resident assistants, and the college is committed to ensuring they have the best possible experience in their roles as student leaders on campus. We are reviewing this petition.”

Gasman, who uses they/them pronouns, doesn’t think it’s possible for working conditions to improve for RAs without a union. “Even with the most compassionate and genuinely caring administrators, it’s really difficult to get these types of positive changes done — particularly the things that cost money,” they said.

Gasman became an RA at Georgetown in 2018 to help support students. Gasman was excited, especially because the job was supposed to cover room and board at a university where tuition exceeded $53,000 in 2018.

But Gasman soon realized that the dining plan offered only nine free meals per week. They ended up taking two additional part-time jobs to afford to eat. After talking with other RAs at Georgetown, Gasman realized it was a common problem, particularly for students who relied on the compensation to pay for college. What’s more, Gasman said, RAs were expected to respond to student crises but weren’t provided with mental-health care for themselves. And they were sometimes working 40 hours a week, in addition to their time spent in class and studying.

When the RAs began a union campaign, their demands focused on securing contracts, reimbursement for position-associated costs, and mental-health support. The mission statement was simple: They wanted to be treated like workers, Gasman said.

A majority of RAs supported the effort to unionize in 2019, according to Gasman, but the movement lost momentum that spring, after Georgetown announced it would offer expanded meal plans to RAs — a change Gasman said the university had previously said it couldn’t afford. After the university terminated RA contracts due to the pandemic, the union drive seemed to fizzle out.

At Wesleyan, Clarke said, the RA union was in the midst of talks with administrators. Wesleyan RAs now make from $2,600 to $11,000 a year, while the cost of living on campus is more than $18,000. The students hope to finalize a contract by the end of the semester that will increase their pay — a demand about which Clarke expects to hear objections from administrators.

“We’re anticipating a lot of pushback,” Clarke said. “We’ve made posters and not put anything on them to prepare for having a potential rally toward the end of October, depending on how that whole conversation goes.”

Previous articleInside a battery recycling facility
Next articleA Prominent Scholar Was Fired. Neither She Nor Her Institution Will Say Exactly Why.
- Advertisement -