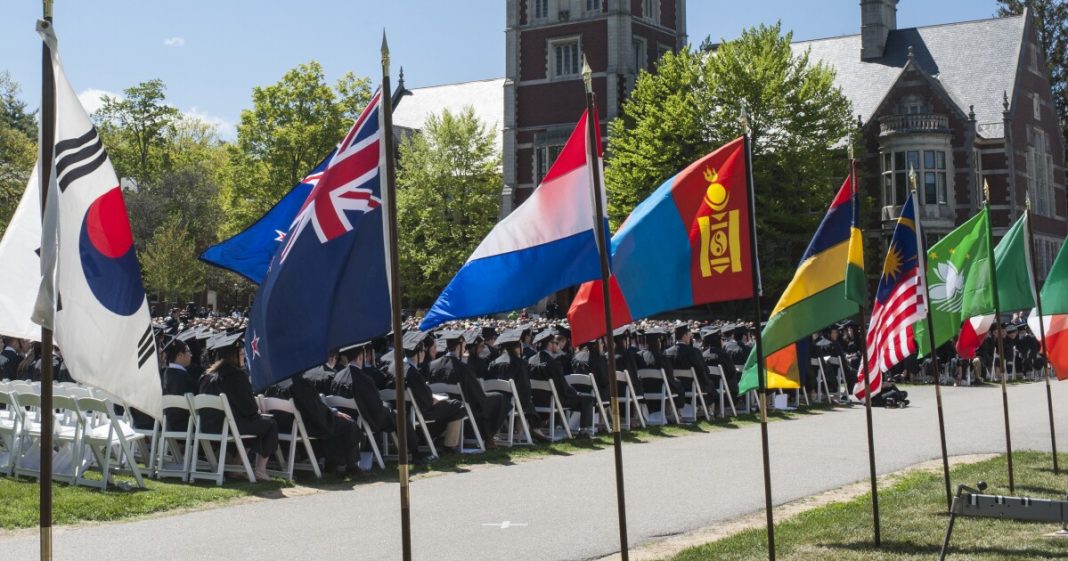 
Bowdoin College will extend its need-blind admissions policy to international students, joining just a half-dozen other American colleges with comprehensive need-blind aid programs regardless of citizenship.

The selective liberal-arts college’s pledge to admit overseas students without considering their ability to pay runs counter to the common paradigm of international students — as sources of revenue who typically cover most, if not all, of the cost of their education.

“We believe our liberal-arts education should be accessible to students from all economic backgrounds regardless of citizenship,” said Claudia Marroquin, senior vice president and dean of admissions and student aid. The Maine college, she said, hopes to “welcome the world’s most talented students, regardless of background.”

Bowdoin joins Amherst and Dartmouth Colleges, Harvard, Princeton, and Yale Universities, and the Massachusetts Institute of Technology in extending its need-blind policy to international students and covering 100 percent of their demonstrated need. Dartmouth was the most recent addition to the group, announcing its own need-blind policy for international students earlier this year.

While some other colleges do have need-blind admissions for international students, they do not commit to fully paying the cost of their degrees.

In fact, under its previous policy, Bowdoin met 100 percent of need for all students, including international students. But the private college, Marroquin said, was “need aware” for those with student visas — that is, it considered their financial need in admissions decisions.

Half of Bowdoin’s current international students receive some financial aid, roughly the same proportion as the student body as a whole. Seven percent of its enrollment is on student visas, Marroquin said.

The Bowdoin announcement contrasts with recent trends. Less than 20 percent of international students say an American college is the primary funding source for their education, according to the Institute of International Education, with most relying on personal or family sources or employment.

Over the past decade and a half, international students, particularly at the undergraduate and master’s levels, have become an increasingly important part of many colleges’ revenue streams. Although they account for only about 5 percent of all students on American campuses, international enrollments increased more than 60 percent in the years leading up to the pandemic, and their tuition dollars have helped make up for state budget cuts and demographic declines that have shrunk the college-age population in some parts of the country. During the 2007-8 Great Recession, revenue from international students bailed out some public universities, researchers have found.

Despite the recent announcements by both Bowdoin and Dartmouth, it is unlikely many colleges will follow suit. Although international enrollments declined sharply during the Covid-19 pandemic, foreign-student tuition remains a critical funding source, and preliminary reports suggest those student numbers are rebounding.

Marroquin acknowledged that Bowdoin, which in 2021 had an endowment of $2.7 billion, has the resources to put a generous need-blind policy in place. As the competition for top international students — both among American colleges and globally — heats up, an important question will be whether such policies give institutions like Bowdoin an edge.

Marroquin said that she hoped removing concerns about cost could lead more international students to consider Bowdoin but that it was too early to predict how going need-blind would affect the overseas applicant pool. For Bowdoin, international students are valued for their perspectives, their presence on campus vital to a “global community,” she said.

Marroquin has done international recruiting herself, traveling to Central and South America for the college to meet with promising students and their families, only to have to make “tough” decisions in the admissions process based on financial need.

The change had been under consideration for some time, said Marroquin, who became admissions dean a year ago. It is part of broader efforts to put students on “equitable footing regardless of background.” Since 2016, for example, the college has waived application fees for all students who are the first in their family to go to college or who are applying for financial aid, including international students.

“It aligns our policies with our values,” Marroquin said of the need-blind expansion, “and what’s important to us.”