Why Talk of Student-Debt Cancellation Is Creating Headaches for Colleges 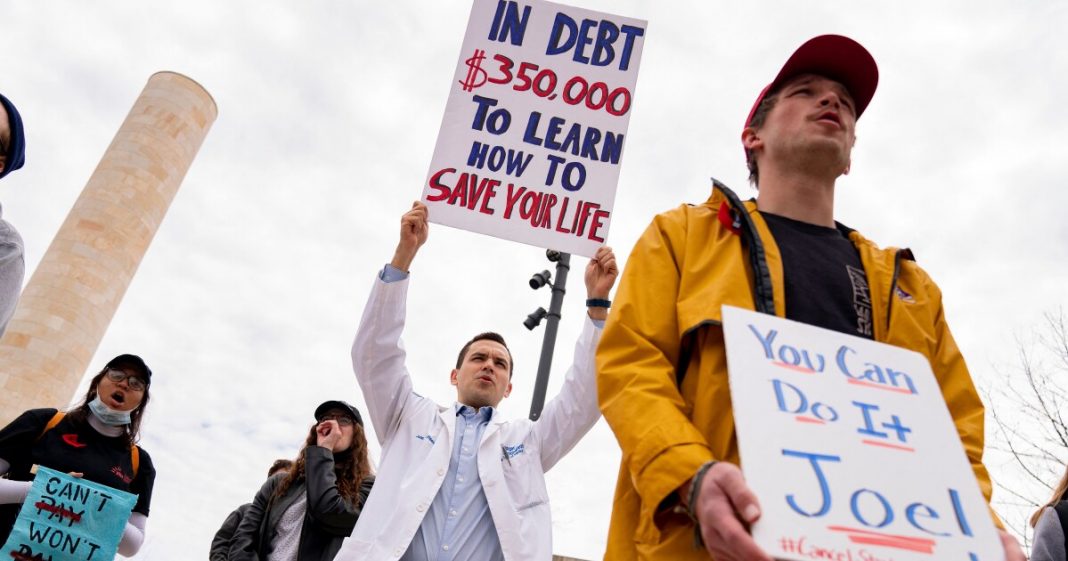 
After years stuck in limbo, the idea of widespread federal-student-loan cancellation has suddenly picked up momentum over the past week. But with the details yet to be determined, colleges are struggling to explain to current students what debt forgiveness could mean.

Meanwhile, some advocates remain concerned that the national discussion has not included ways to solve student debt on a more structural level for future students and borrowers.

“Forgiveness by presidential fiat is not sustainable or good public policy,” said Justin Draeger, president and chief executive of the National Association of Student Financial Aid Administrators, whose members have been dealing with a deluge of questions from students and their families about whether they might be eligible for student-loan forgiveness.

While targeted loan forgiveness is welcome news for today’s borrowers, Draeger said, it does nothing to help next year’s. “Loan forgiveness has to come with rethinking some of our national student-loan policies,” he said. “I see very little on that. That’s where the rubber meets the road for institutions, for financial-aid offices.”

On the campaign trail, President Biden pledged to cancel at least $10,000 in debt for each borrower. He also promised to forgive undergraduate federal student debt for borrowers earning up to $125,000 annually who attended two- and four-year public colleges, as well as private historically Black colleges and universities and other minority-serving institutions.

The U.S. Education Department declined to comment about the details now under consideration. The Washington Post has reported that the administration is looking at individual income limits of either $125,000 or $150,000 for debt forgiveness, canceling debt of between $10,000 and $50,000 per borrower, and restricting loan forgiveness to undergraduate loans. The administration could also consider tying loan forgiveness to the restart of payments after a pause of more than two years, now set to expire August 31.

About 45 million people who hold a combined $1.7 trillion in student debt will be watching the issue closely. Since 2006, student debt has more than tripled in the United States, with one in five households now holding student loans compared with one in 10 in 1989. Biden said on Thursday that he expects to take action in the next couple of weeks.

If he does, colleges will play a role in explaining what comes next for students, the process of obtaining debt relief, and what they will need to do — if anything — to receive it.

The Impact on Colleges

For now, however, campus staff members are having to muddle through uncertainty.

Draeger said financial-aid counselors, who work to help students stay in good standing on loans and provide them with information about tools to deal with debt, are torn between explaining current programs, evolving changes, and everything they’re reading in the news.

He said the national conversation about possible debt relief also plays into how colleges are thinking about their own loan policies — which was a challenge even before debt cancellation was on the table.

Sameer Gadkaree, president of the Institute for College Access & Success, said the biggest question on his mind is who would take the lead on helping student borrowers navigate any changes in their loans: the Education Department, loan servicers, colleges themselves, or others.

Loan forgiveness has to come with rethinking some of our national student-loan policies. I see very little on that.

Gadkaree said he is also eager to see how any debt cancellation would be handled administratively, including whether loans would be forgiven automatically or borrowers would have to apply, and if so, what kind of documentation would be required.

Those types of details will affect how quickly the program could be put in place and how many borrowers would ultimately benefit, he said, noting that administrative hurdles have previously limited the benefit of income-driven repayment programs and programs for public-service workers, for example.

Gadkaree said that any income limits in a new loan-forgiveness program should be weighed against the administrative barriers those limits could present for borrowers. “If this income exclusion means that it’s very complex for everyone to access this benefit, it’s worth weighing that cost as well to that equation,” he said.

One upside of all the talk about student debt cancellation, according to Jonathan Fansmith, assistant vice president for government relations for the American Council on Education, is that it has encouraged college presidents to think even more seriously about the programs their institutions offer, how much they cost, and student outcomes.

College leaders are considering, for example, whether they need to provide more financial-aid counseling for students, which programs should even be offered, and how to reduce costs to students, Fansmith said.

The Pros and Cons

On and off campuses, the arguments for and against universal debt cancellation have been making the rounds in recent weeks.

The political considerations around debt forgiveness — particularly just a few months before midterm elections — are complicated. “There is a big political dimension to this, which further muddies the water for what makes for good policy here,” Fansmith said.

A Harvard Youth Poll released last week found that while 85 percent of young Americans, from age 18 to 29, would like the government to take action on student-loan debt, only 38 percent favor total debt cancellation.

Progressives within the Democratic Party, including Sen. Elizabeth Warren and Sen. Bernie Sanders, have long pushed for widespread debt forgiveness. Some supporters argue that debt cancellation is one way to chip away at the racial wealth gap, since Blackborrowers are disproportionately affected by student debt.

Opponents include those who don’t want to commit taxpayer dollars to benefit students who racked up debt attending expensive colleges, some of whom earn enough to repay their debt. Sen. Ted Cruz has said canceling student debt would be “profoundly unfair” to those who have worked hard to pay off their loans.

And some critics would like to see aid better targeted to those who are truly in need. A recent report by the Brookings Institution, for example, argued that widespread debt cancellation is regressive and a costly and ineffective way to reduce economic gaps by race or socioeconomic status.

Legally, there is some question as to whether the president has the authority to unilaterally cancel federal student loans; Republicans would almost certainly try to challenge such an action in court.

Under Biden, the Education Department has already carried out several more-targeted measures to help student borrowers, including expanding the Public Service Loan Forgiveness program, helping borrowers who were defrauded by colleges, and discharging the debt of borrowers with permanent disabilities. Altogether, the administration says it has discharged about $17 billion in student loans for more than 700,000 borrowers.

Gadkaree hopes that no matter what the administration decides in terms of one-time loan forgiveness, the national conversation will turn to longer-term solutions. “It remains important for us to create some kind of path to debt-free college,” he said.