Why U. of Michigan and Cal State Are Changing Their Presidents’ Contracts 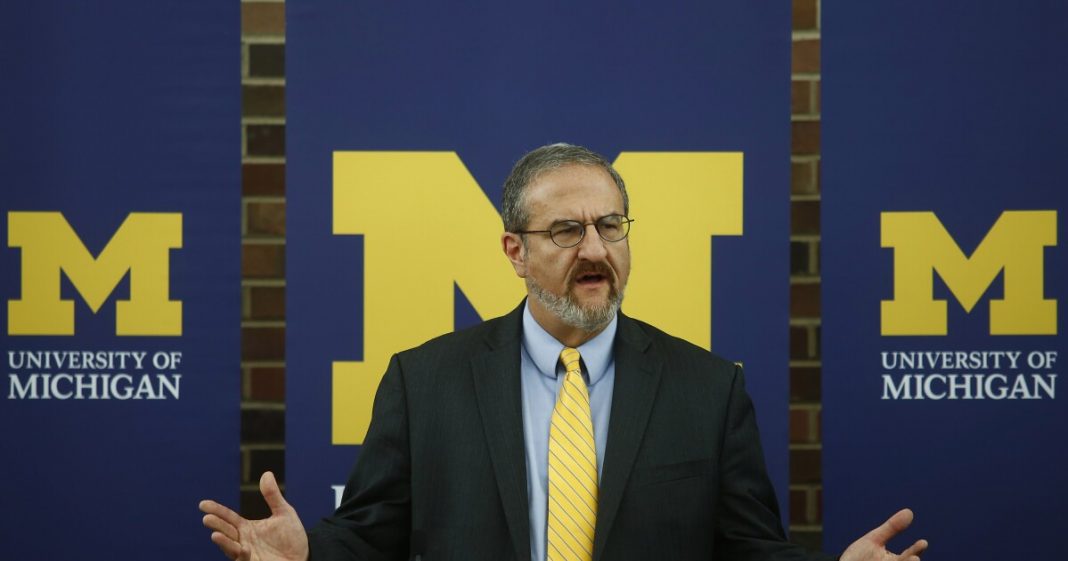 
Mark S. Schlissel, who was fired in January as president of the University of Michigan, is still earning a paycheck from the university. Despite an investigation of his “alleged sexual affair” with a subordinate — a direct policy violation — Schlissel exercised a clause in his contract that allowed him to remain as a tenured professor of molecular, cellular, and developmental biology on the Ann Arbor campus.

Schlissel took advantage of what’s known as his faculty-retreat rights, a common feature of many higher-education administrators’ contracts that gives them the right to “retreat” into the role of a professor, often tenured, after leaving an administrative post. Some contracts do not rescind retreat rights even if the administrator is fired for cause, as Schlissel was, creating a significant loophole for administrators who leave their positions in disgrace.

That could soon change. Michigan and the California State University system, where faculty-retreat rights were at issue in recent scandals, took steps this week to limit their use.

At Michigan, the contract of the incoming president, who was hired this week, specifically states that if he were fired for cause, he would forfeit his faculty-retreat rights. (A university spokesman would not comment on the reason behind the shift in contract language.)

Meanwhile, Cal State’s Board of Trustees voted this week to standardize its contract policies across the system’s 23 campuses, to require administrators’ appointment letters to specify the terms of faculty retreat, and to revoke them if an investigation finds misconduct or if one is still underway.

Michael Uhlenkamp, a Cal State spokesman, said the new policies were a direct response to the use of faculty-retreat rights by administrators accused of wrongdoing. In February, Joseph I. Castro, the system’s chancellor, resigned after it came to light that he ignored sexual-harassment allegations against another administrator when Castro was president of Cal State at Fresno, and then made a deal with the administrator that included a $260,000 payout, retirement benefits, and a clean record in exchange for a promise that he wouldn’t exercise his retreat rights or work on a Cal State campus again. And in 2016 a dean at California State Polytechnic University at Humboldt retreated to the faculty after he was fired over allegations of sexual harassment, Uhlenkamp said. The former dean remains a professor at the university.

Faculty-retreat rights have long been an element of college-leadership hiring, but the loopholes within them allow exiting administrators to procure bigger payouts and sometimes to keep their tenured positions despite potentially career-ending controversy.

According to research by James H. Finkelstein and Judith A. Wilde, professors at George Mason University who study presidential contracts and hiring practices, 69 percent of the contracts they have collected guarantee tenure at the end of the contract. And many of them include a guaranteed salary that was likely to make the former presidents the highest-paid faculty member in their department, often by “a factor of two or three,” according to an essay Finkelstein and Wilde wrote for Inside Higher Ed in 2017.

My hunch is that you could almost call that a ‘Schlissel Clause.’

The exact terms of faculty-retreat rights vary, but some spell out the salary, the benefits, the department, and whether tenure will be granted. According to Melissa M. Carleton, a partner and higher-education chair at the law firm Bricker & Eckler, retreat rights are used in elementary and secondary education, too, but higher ed’s tenure system makes them far more desirable.

“The only difference is the tenure piece,” Carleton said. “It gives you the long-term benefits that you may not have in other industries.”

Carleton, who often advises academic institutions, said retreat rights can help colleges retain employees who have an institutional history, like tenured faculty members who are promoted to administrative roles for some set period of time but intend to return to their tenured posts afterward. She also said the rights can be used to entice prospective administrators.

“If you can’t get anyone without signing it, then that may be what you have to do,” Carleton said.

But the clearest beneficiaries are the new administrators, who get a long-term, guaranteed position as long as they comply with their contracts’ terms. George Birnbaum is an executive-compensation lawyer who has dealt in contracts for presidents and senior deans. He said that, because many administrators may be giving up tenured positions to move to another university, “they need the protection” of faculty-retreat rights.

“Tenure is so valuable these days, and many schools are trying to cut down the number of tenured faculty,” Birnbaum said. “Historically, schools have said, ‘Look, you’re giving up your tenure, or you’re making a big move. We’re going to make certain that you have the added protection if things don’t work out in your administrative position.’”

Birnbaum said the equivalent rights don’t necessarily exist for executives in other fields, who are “making meaningfully more money” than college administrators are and who tend to have more-lucrative severance packages.

Even if college presidents decide not to exercise their faculty-retreat rights, Wilde said, they often use them as a “bargaining chip” to negotiate much higher severance pay than was written in their contracts.

Wilde said presidential contracts have also become more complex on this issue. For example, in the contract for Michigan’s new president, Santa J. Ono, the clause that specifies the situations in which faculty-retreat rights can be revoked is probably a direct response to Schlissel’s firing, Wilde said.

“My hunch is that you could almost call that a ‘Schlissel Clause,’” Wilde said. “Even though he was fired with cause, there was nothing in his contract that said there was any reason that he wouldn’t be able to stay on as a professor.”

Experience is often the basis for changes in contract law, Carleton said. Contract language develops because the lawyers drafting it saw a loophole in a previous document and sought to close it. Then, every time they draft another contract, they do the same, meeting that new contingency.

But Wilde also wondered about the bargaining process that led to the “Schlissel Clause,” which she said is unusual. The contract, Wilde said, promises an unusually high salary in the post-contract tenured position, which is at least 50 percent of Ono’s base salary at the time of his leaving and so is likely to be greater than $500,000. His current annual base salary, as laid out in the contract, is already $975,000.

“Clearly, they had a lot of negotiation in this,” Wilde said. “And clearly, he had a good attorney.”

Previous articleWill Your College Get Any Money From the Last Round of U.S. Covid Relief? Check Our List
Next articleCrisis-Pregnancy Centers Have Been Orbiting Campuses for Years. What Are They?
- Advertisement -