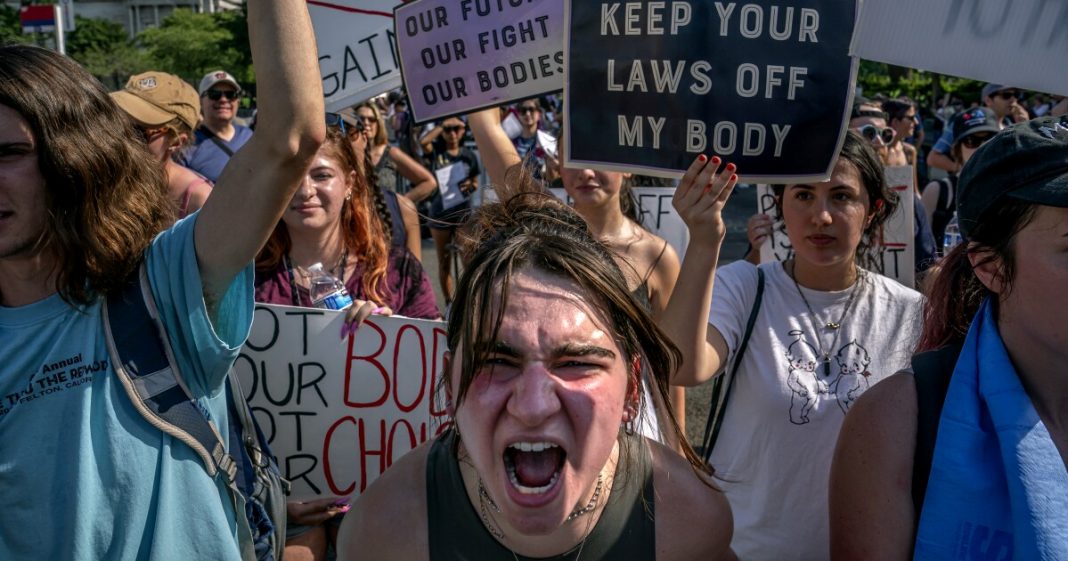 
The Supreme Court’s decision on Friday to overturn Roe. v. Wade and Planned Parenthood v. Casey, the cases that defined abortion as a constitutional right, will negatively affect many students’ ability to attend and finish college in the years to come. Research shows that women from lower socio-economic backgrounds are more likely than students in other groups to take breaks from their studies to care for children.

Less well-known, though it has been speculated about, is the impact the ruling will have on students’ — and staff and faculty members’ — choice of college.

It remains true, one enrollment expert said, that the ability to go to college in another state is a privilege generally reserved for wealthier students.

For some students, the Supreme Court’s decision in Dobbs v. Jackson Women’s Health Organization compounds other factors — such as laws against critical race theory and attempts to pass anti-transgender bills — that make them feel unsafe in a swath of states, affecting the list of institutions they choose to apply to or attend. But scholars and administrators say the vast majority of college students enroll near where they live for reasons that Dobbs may not change.

Emma Casas, a rising high-school senior from Omaha, Neb., understands that. She considers herself lucky to be able to consider colleges in other states. Casas said the Dobbs decision “completely shifted” her mind-set when it came to her college search. The University of Nebraska at Lincoln was her first choice, since it made financial sense and would allow her to remain close to home. Now she’s not so sure she wants to stay.

While Nebraska doesn’t have a trigger law that automatically prohibited abortion following the Supreme Court’s decision, the Republican governor is expected to call a special session soon to try to pass an abortion ban in the state.

“Where the money goes is really important,” Casas said. “I’m hesitant to spend money on education in the state, especially like Nebraska with a governor like Pete Ricketts.”

Ambika Ramadurai, a rising senior in high school from San Jose, Calif., said while she was initially open to going to college in states across the country, she’s now reconsidering whether to apply in states like Texas, where abortion is restricted and will very likely become illegal.

She said especially since reproductive health care is already disproportionately less accessible to people of color, she’s concerned about attending college in a state where abortion is illegal.

“As a woman, but also a woman of color, I think it’s really important that the schools that I’m looking at are schools that are in states that give me the opportunities to access abortion if I need to, and also just general access to reproductive health care,” she said.

Agnes Scott College, in Atlanta, was one of Ashna Parekh’s top choices. It’s a small, diverse liberal-arts college, and she could not wait to apply. But on Friday morning, Parekh, a rising senior from Irvine, Calif., woke up to the news about Roe. She cried to her mom and immediately realized that the decision might have a major effect on her life. Georgia has not banned abortion but is expected to restrict it soon.

“It didn’t feel safe at that point,” Parekh said. “I took it off my list completely.”

College counselors said anecdotal evidence suggests many of their students who have options about where to study will take abortion laws into account. Arun Ponnusamy, a California-based counselor, said that already on Monday a student had said he wanted to take Texas A&M University at College Station off his list, not explicitly because of the abortion decision, but because, as he said, “It’s just not who I am.” Ponnusamy hypothesized, though, that smaller private colleges that rely on students who can pay full freight would feel the decision the most. Lauren Cook, dean of college counseling at Jewish Community High School of the Bay, a small private school in San Francisco, said students have been talking about which states will have abortion bans since the Dobbs decision was leaked in May.

Some researchers and higher-education administrators have speculated that the overall effect on college enrollment will not be very noticeable.

“The overwhelming majority of students go to a college within 100 miles of their home,” said Terry Hartle, senior vice president for government relations and public affairs at the American Council on Education. “That hasn’t changed for generations. It’s hard to imagine any single event changing that.”

Jon Boeckenstedt, vice provost for enrollment at Oregon State University, analyzed colleges’ out-of-state populations after the Dobbs ruling in a recent post on his blog about higher-education data.

“Politics or climate, whether it’s weather or political climate, has always played a role,” he said in an interview. “This might be a little bit different. I don’t necessarily think it’s the SCOTUS ruling. I think it’s more the states’ reaction and what it says, especially to young women but also to young men.”

As of Tuesday, seven states had banned nearly all abortions, according to The New York Times. More states are expected to ban the procedure in most cases soon. Even if thousands of students respond by changing their decisions about where to go to college, Boeckenstedt said, the Dobbs decision is unlikely to change the landscape of college enrollment. It remains true, he said, that the ability to go to college in another state is a privilege generally reserved for wealthier students.

Not Students, but Faculty

John V. Winters, an economics professor at Iowa State University who has studied college-student migration, said in an email that large public universities in the South that attract out-of-state students tend to get students from nearby states, which will most likely have similar abortion laws.

“For UT-Austin, in particular, if some people decide to attend elsewhere, the university will just move down their waiting list and bring in as many students as they want,” he said.

Winters added that students who go out of state for college may also be able to afford to travel to a different state for an abortion. But there is one constituency who he thinks will take abortion bans into effect when choosing a university: faculty members.

Elizabeth Eager, an art-history scholar at a university in Texas that she asked not be named, has spent the past year in California on research leave. On Monday, three days after the Supreme Court’s decision came down, two moving containers sat in her driveway ready to be filled with her family’s belongings and taken back to Texas.

But Eager had spent the weekend on the phone with her sister and friends in both Texas and California, worrying about the Supreme Court decision and the move back.

“There’s the philosophical question of living in a regime that doesn’t believe I am a fully autonomous human with the power to make decisions about myself,” Eager said. Then there are also practical questions. She’s done having kids, but what if she gets pregnant again? What happens if she miscarries and is then suspected of having had an illegal abortion?

Some of the commentary online among academics has included calls to boycott conferences and presentations in states where abortion is banned. That worries Eager.

“The friends I talk to really find that scary and isolating,” she said. ”Conversations about gender, race, bodily autonomy, are exactly what the Republican Party doesn’t want to have happen. Moving that conversation away from Texas does seem counterproductive.”

One of her friends who agrees is Raisa Rexer, an assistant professor of French at Vanderbilt University. Rexer is in a position similar to Eager’s. She has spent the last year on sabbatical, living in Brooklyn, and plans to return to Nashville in August. For Rexer, the decision about whether to live in Tennessee, where an abortion ban is expected to take effect, is an ethical one. She worries that staying in Tennessee makes her complicit with laws she disagrees with.

“The thing that bothers me the most is the sense of moral weight,” she said. “So much contradicts my beliefs.”

Rexer said she tells her students at the start of each semester that if something happens to them, like they become a victim of a sexual assault, she will help them, though she reminds them she is a mandatory reporter. About once a year, a student does ask for this kind of help. Rexer wonders whether she may one day be held liable if a student she helps later gets an illegal abortion.

To even consider leaving feels like a privilege to Rexer. So far, she plans on staying put.

“To make the decision to leave and not live in a place where the laws are totally contrary to our personal beliefs means that we’re giving up our careers,” she said. Rexer’s research area is 19th-century French literature and culture, and the year she got her job at Vanderbilt there were three positions available in the whole country. It’s not so easy to pick up and move to another state.