With Emotional-Support Animals on the Rise, How Are Colleges Responding? 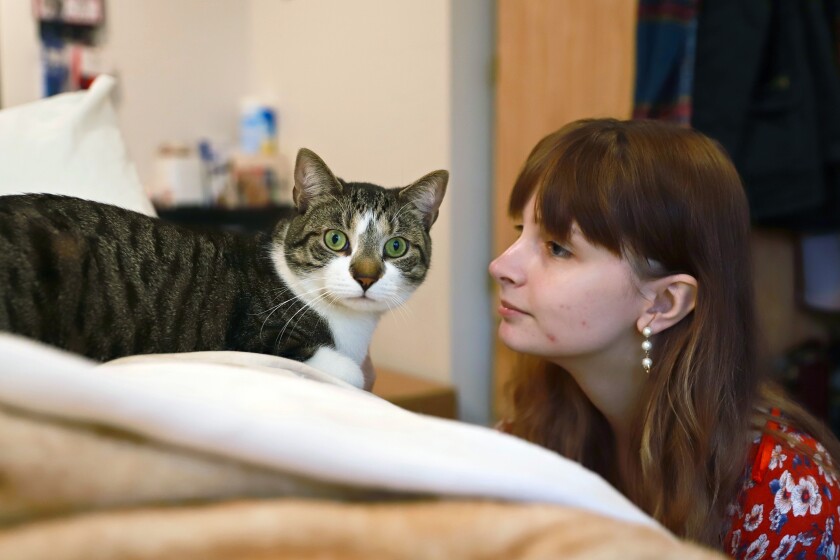 
Jessica Scull had just been accepted to Columbia University as a transfer student when she met the companion who would become a crucial source of strength in her life: a gray and white cat named Smokey.

Scull, who had recently been diagnosed with ADHD, anxiety, and major depression when she adopted him, in May 2021, says the effect on her mental health was immediate — so much so, she couldn’t bear the idea of moving to Columbia without him.

Smokey once stuck his snout into her mouth as she was experiencing a panic attack, distracting her “long enough to snap out of it.”

“I don’t know where he learned that, but he’s very in tune with my feelings,” she says.

It used to be rare to see cats like Smokey — or any animals — in college housing. But today, emotional-support animals, or ESAs, are increasingly common. While experts are reluctant to tie the uptick of ESAs on campus specifically to the pandemic, there’s been a substantial increase in their number over the past decade, as students’ mental-health concerns have been on the rise.

When a student requests an emotional-support animal, the federal Fair Housing Act makes it illegal for housing providers to discriminate based on disability. Providers must grant “reasonable accommodation” to anyone with “mental or physical impairments that substantially limit one or more major life activities.”

Colleges historically resisted allowing animals in dormitories, fearing that they would be disruptive and that students who didn’t really need an emotional-support animal would take advantage of such policies to bring their pets to college. In recent years, the legal case for animals on campus has strengthened, but experts say concerns about fraud and misconceptions about their purpose have persisted.

While many colleges have accommodated the increased interest in emotional-support animals, not every one is as receptive to the requests. Students say that the application process can be long and difficult, that the rules can be overly restrictive, and that administrators and roommates don’t always understand the animals’ role.

Experts who spoke with The Chronicle say that way of thinking is rooted in misunderstanding and minimizes the struggles of students seeking accommodations. They hope to move past that stigma and educate colleges on how to better field requests for the animals.

“We have a group of young adults that are having an exacerbation of mental-health issues, and that’s a big part of what emotional-support animals are there for,” says Janet Hoy-Gerlach, a professor of social work at the University of Toledo. “It’s important to take that into account and try to work in ways that are supportive of people’s well-being.”

On the door of Scull’s dorm room, a few blocks from Columbia’s campus, there’s an orange-and-white sign with the silhouettes of a dog and a cat, marking it as a residence with an approved emotional-support animal.

Inside, a leash hangs over a mini-fridge and a roll of sanitizing wipes. A cardboard box lined with a plush blanket rests on its side next to the door. Across from the bed, there’s a cat tree covered in toys that’s shoved between a bookshelf and a wardrobe.

One recent afternoon, the man of the hour — Smokey himself — strides up and down a long carpet as if it’s a personal catwalk. Smiling, Scull says one of her favorite parts of the day is when he lies down on her chest. She says she makes it a part of her schedule every morning.

The human-animal bond is a real, research-driven phenomenon. Hoy-Gerlach, who’s also a licensed mental-health clinician, says she was drawn to study it after doing risk assessments early in her career for people having suicidal ideation. Over and over again, she heard them cite their pets as the reason they were still alive.

She led a recent pilot study that indicated emotional-support animals can help adults recover from chronic mental-health issues. The study, published in 2021, followed a group of adults who had adopted cats or dogs, and measured their saliva samples over a year’s time to gauge stress and happiness.

While Hoy-Gerlach says the study’s findings on saliva content will need to be backed up with additional research, interviews with the participants yielded strong testaments. They said their mental health was much better than it had been 12 months earlier, and specifically credited their animal, citing benefits like motivating them to take better care of themselves, providing comfort, and helping them calm down.

Unlike service animals, emotional-support animals aren’t expected to perform tasks and don’t have specialized training. They provide therapeutic benefits — some tangible, others less so — to their owners.

“I can comfortably say the animals were, on their own, a really tremendous, life-changing experience for this group,” Hoy-Gerlach says. “As a researcher, I can’t generalize, but I can say this fits with research on pets and people with mental illness.”

That’s also been the case for Scull at Columbia. Every morning, she says, Smokey wakes her up between 7 and 8 a.m., which reminds her to take her medication. In the evening, his dinnertime falls right before Scull goes to bed, reminding her to get good sleep.

Scull says it was relatively easy to get Smokey approved as an emotional-support animal, but it didn’t used to be that way. Ten to 15 years ago, college administrators often balked at such requests. Over time, however, colleges’ legal obligations have come into sharper focus.

Grand Valley State University settled for $40,000 with a student who sued after officials at the Michigan institution told her she couldn’t live with her emotional-support guinea pig in 2013. In 2016, Kent State University paid $100,000 to settle a fair-housing lawsuit after denying a student’s request to live with her dog despite a psychologist’s recommendation that it would help treat her anxiety.

Columbia handles ESAs as other colleges do: They are eligible for approval as a “reasonable accommodation” for students with a disability. Students planning to bring an emotional-support animal to campus housing must submit a registration form and documentation of their disability.

Most institutions require students to provide “reliable documentation” from a licensed mental-health professional that asserts their need. From there, the housing provider or the campus accessibility office — or, sometimes, both — will either approve or deny the request.

The trouble for colleges, Wisch says, often hinges on what is considered reliable documentation. That’s gotten more complicated with the rise of websites that sell ESA letters. The U.S. Department of Housing and Urban Development stepped in, clarifying that internet documentation alone is not sufficiently reliable, Wisch says. But now the pandemic has led more people to seek telehealth services, which could further complicate colleges’ decisions.

Many colleges have devised their own definitions of reliable documentation, Wisch says. “It’s that tenuous line of being a housing provider that you aren’t interfering too much in a person’s medical history but you also want that reliable documentation to establish that therapeutic need for the pet,” she says.

The animals were, on their own, a really tremendous, life-changing experience for this group.

Some institutions have also designated pet-friendly residence halls to avoid conflicts between students with animals and students who may, for instance, be allergic to dogs. Stetson University, in Florida, allows some students to live in “animal-friendly housing,” which welcomes animals on a list of approved pets.

State lawmakers and government officials have voiced increasing concern about fraud, saying “fake” emotional-support animals can endanger trained service animals — and even people. But Naomi Weinshenker, a psychiatrist in New Jersey who largely works with young adults, says having an existing relationship with a patient mitigates fraud. The medical provider is able to make a decision based on sound clinical information, not off a 10-minute online survey, Weinshenker says.

Over all, Weinshenker says, she supports ESAs as a therapeutic intervention, as long as they are combined with other treatments.

“It’s one tool in an arsenal,” Weinshenker says. “It’s not necessarily the only thing, but it certainly adds to the benefit you get from meds and therapy.”

The notion that students with emotional-support animals are “gaming the system” is rooted in general mistrust of the accommodations that disabled people receive by law, says Amanda Kraus, president of the Association on Higher Education and Disability and executive director of the University of Arizona’s Disability Resource Center.

She describes ESAs as a legitimate accommodation and feels animals are a hot-button issue in part because they are more visible than other accomodations. In fact, disabled students can request a range of accommodations, like extended time on an exam or captioned videos. Kraus says she feels part of the problem is how society casts doubt on people whose disabilities are less visible than those who are blind or use a wheelchair.

“Disabled people don’t just get stuff. There are processes in place, and that process is what really determines the reasonableness, the effectiveness, the sustainability of a solution,” Kraus says. “These are not just disabled people who go buy a dog and bring it to class.”

As for the possibility of fraud, she says, there will be outliers in any setting, and assuming that disabled people are cheating undermines the sound procedures in place.

At Arizona, students submit a form, and the Disability Resource Center staff works with them to understand how an emotional-support animal might help. The goal is to find a solution that serves the interests of the student, the animal, and others who could interact with the animal, like roommates.

“The goal,” Kraus says, “should be asking, ‘How do we ensure this student has a fully accessible experience so they can engage with all of the wonderful things that are going on on campus?”